some of those that work forces.... 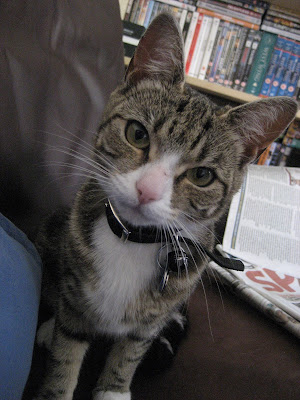 I took the cat to the vet on Saturday morning.  Two hours later - two hours! - I emerged with a problem:  I was going to have to attempt to put a pea-sized drop of ointment into her eye once a day for the next week.  You'll have seen the jokes about giving a cat a pill, I'm sure.  Let me tell you... I don't think putting ointment into a cat's eye is much easier.  You're no doubt better at this than I am, but for us, this is a two-person job and involves swaddling her up like an egyptian mummy and then holding this squirming bundle tight as you attempt to hold one eye open long enough to apply the ointment before the whole thing escapes and a seething mass of claws and swearing.

This is bad enough, but unfortunately it didn't end there as the vet also asked me to collect a urine sample.  If you're anything like me, then you'll be wondering how on earth you do that.  Do you just pick up and squeeze or what?  Well, no.  I now know that you get some special,  non-absorbent litter and then simply shut the cat in until she pees and you can collect the sample.

Our cat is - and always has been - very fastidious.  She has a litter tray, but ever since she was a kitten she has always preferred to go outside.  She finds the whole process distasteful, I think.  When she was small and was shut inside during the day, she used to wait until we were back from work before hopping onto the litter tray.  As soon as the deed was done, she then wanted the whole unpleasant mess cleaned up as soon as possible, her disgust visible to all.  As soon as she was old enough, we installed a cat flap and no one was happier than her.

So.  At about 5pm last night, I shut the cat flap and put the special litter in the tray.  The cat fairly quickly wanted to go outside, of course, and stared balefully at the cat flap for a while, complaining.  I introduced her to the tray to remind her it was there and hopefully what it was for, but she wasn't interested.  Too soon.  I tried her again several hours later, before going to bed, but again she wasn't interested yet.  I was half expecting to be woken up at about 4am by a cat anxious for an al fresco toilet visit, but nope.... at 7am when I got up, the cat was fast asleep on a chair without a care in the world.  I had a quick check around for suspicious wet patches.  Nothing.  After a bit, she came down for her breakfast, but although she clearly needed to pee, and cast the odd baleful glance at the litter tray, she was appeared damned if she was going to use it.  As we had to go to work, we simply shut the kitchen door and left her to it.

As we walked past the kitchen window on the way to the car, the cat was already on a work surface staring at us with a look of "Yeah?  So I'm on the worktop.  What are you going to do about it?  Fuck you!"

C. popped home at lunchtime - so some 17 hours since we shut the cat flap - and the camel-bladdered little madame still hadn't gone and still wasn't interested in the litter (although by now she wasn't keen on being picked up and having her tummy pressed).  Fuck you, I won't piss where you tell me.   Defiant to the last.

An hour or so later, and still shut in the kitchen, she finally gave up.  After much scratching and pawing at the litter, there was suddenly a sound like the bathroom tap being turned on, followed by the sound of a disgusted cat trying to get the hell out of there as fast as possible, scattering litter everywhere, such was her haste..... the sample was duly collected and delivered to the vet whilst it was still warm.  Mmmm.  Delightful

As the front door was finally opened, the look on the cat's face was apparently a sight to behold: she was simply incredulous that this could not have happened five minutes earlier and spared her the unpleasantness.

Mind you, as it's been raining here all day, since she's been freed, the cat hasn't actually been outside at all.  She's fast asleep on a chair, secure in the knowledge that she could go out if she wanted to.  That, apparently, is enough.