I saw a clip from the opening scenes of the film "Trainspotting" the other day.  I haven't watched it for years, but it took me right back.  I started reading the book on the train on my way from University in Warwick to go and have an interview for the MA course at York.  It takes a while to tune into the dialect, of course... but it's an incredible, gripping book.  The film is pretty good too, and it has an excellent soundtrack.  This scene in particular is a beautiful marriage of sound, scene and that narration.  Choose life....  Funnily enough, I've also had "The Passenger" in my head this week too.  Maybe I should dig out my Stooges albums?

This song is a kind of perpetual, low-level earworm for me.  It starts playing on my car stereo whenever I plug my iPhone in, because it's the first song by alphabetical order on the device.  It's no bad thing, but it does mean I've heard the first 15 seconds of this song literally hundreds of times before I've got another playlist on.  It's a good song though, as I was reminded when I heard it in full on Wednesday night this week.  I really like the new Vampire Weekend album too, and timings permitting, I might go and see them again at Glastonbury in a few weeks.  The weather is set fair and I'm starting to really look forward to it now.

Not as good as "Gran Turismo", but it's the first of their songs that caught my ear and I think that I still have the CD single kicking around somewhere.  Remember them?  And no.  I haven't seen that version of Romeo & Juliet, thanks.  And no, I won't be going to watch his Great Gatsby either.

I remember the Finlay Quaye re-worked version of this song fondly(-ish), but you can't go wrong with a bit of Bob, can you?  Apparently his headphones are better than Dr. Dre's too.  They probably make you look less of a bell-end too.

Cheers for that, Yoko Spungeon.

I had the longest, dullest briefing in the world today for the two hours between 2pm and 4pm on a Friday afternoon.  The last slide?  "The Never-Ending Story".  I think they meant it as a way of saying that the great story of our company goes on, but after that presentation, the other interpretation was much more apt.  Good grief.  I loved this song as a child, but what a haircut.

Well, they were an incredible band, were they not?  I heard this over breakfast this morning on the radio and it was EPIC.

“That Was Just Your Life” - Metallica

My MP3s of "Death Magnetic" seem to be a bit dodgy, and I think I might have to download the album properly soon.  It's not everyone's cup of tea, but I really like it.  The first Metallica album I bought was "And Justice For All", but after the Black Album, I've not really been that fussed by their work.  This album feels like a real return to form, but I know that for some people they will never be as good as they were back in the day.  I re-watched the film "Mission to Lars" last weekend.  It's a lovely film about a quest by the brother and sister of a guy with Fragile-X syndrome to meet Lars Ulrich and it's the single best piece of publicity that the band have had since the whole Napster debacle.  It's a fantastic film.  Probably as a direct result of that, I've had the album on again this week.  I love "All Nightmare Long" too, and that could easily have made the list too, but this was the first song they played when I last saw them live.  IT WAS EPIC.

“Everyday I Love You Less and Less” – Kaiser Chiefs

I'm not really a fan, and I really don't get that advert they're doing on the telly at the moment for a product or company whose name completely escapes me.  That said, I heard a snatch of this on the radio and it's followed me around all week, so you can't deny the earworming power of some of these songs.  Don't even mention "Ruby" or we're all in a whole lot of trouble.

This seems to be one of those albums that just sinks it's way into your consciousness over time.  It's getting better and better.  Great band.

“The Rains of Castamere” – The National 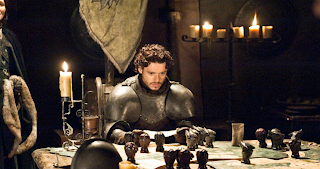