blackbirds flew in and to the cooling towers....

The fact that I had this bloody song stuck in my head became a topic of conversation in the office.  This would probably be a bad thing under normal circumstances, but as it interrupted another conversation about how I had an unfortunate mental image of another of our colleagues with a speedo tan, this was probably a good thing.  Bloody horrible record.  I'm not a big fan of Keating's, but I honestly don't know if the fact that I saw him taking the corporate shilling and performing to a room full of German pharmacists makes me feel better or worse about him.  What would you do if someone offered you a suitcase full of cash to play your greatest hits for half an hour?  He was able to laugh at himself too, to be fair.  This is a shockingly shit song to have stuck in your head though, eh? 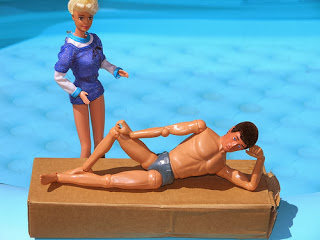 “Merry Xmas Everybody” – Slade
“Fairytale of New York” – The Pogues feat. Kirsty MacColl
“I Wish It Could Be Christmas Every Day” – Wizzard

Look.  I know that it's early October and you probably haven't put your Christmas tree up quite yet.... but I work for a retailer, and we'd have Christmas start in January if we could.  We launched our Christmas gift guide in our stores and put our gift range out last week, and this week I attended a briefing that let me know about all the things we're doing differently this year.  To be fair, the session itself was actually really good, and as well as passing two hours of an otherwise tedious Friday afternoon, I actually learned something.  They were playing THE Christmas CD though.  As you know, I LIKE Christmas music, but I'm heartily sick of hearing the same twenty songs over and over and over again.  There are loads of really good seasonal songs that you probably never hear.  Look up Tracey Thorn's album from last year, for a start... it's excellent.

MASTER! MASTER!  I've come a long way from being the awkward teenager who loved his heavy metal, but he's still in there... and apparently not very far below the surface.  I saw a TV advert for the new Metallica live album, and I was instantly possessed by an uncontrollable urge to listen to some old school Metallica.  This album is AWESOME.  Brilliant band, and certainly one of the best live acts I have ever seen.  What are the odds on them headlining the Pyramid next year?  Nil.... but they'd be IMMENSE.

The new album is mostly pretty downbeat - excellent, but definitely downbeat.  This song, the lead-off single, is probably the exception.  The video is a cracker too, with the band playing in a 1970s Welsh club in a mining town.  The journey this band has been on is almost unbelievable, but here they are, twenty years later and still relevant.  They're as good a band now as they have ever been.  They're certainly better musicians than they used to be.  Perhaps Nicky Wire's knees giving up the ghost has enabled him to focus on more complicated basslines than was previously possible when he was trying to scissor kick every two minutes.

"It's Alright (Baby's Coming Back)" - Eurythmics

This popped in my head as I was cycling home this evening.  I'm not 100% sure if it's referring to the imminent return of my wife from her week of travelling, or if I was actually singing about myself pedalling home and dreaming of a cold beer.  Let's just say I was thinking about the wife, eh?  Yeah.  Let's do that.

“Love Her Madly” – The Doors

Such a good band.  They remind me of being about 14 years old and discovering them for the first time together with a bunch of my friends.  The Lizard King was probably a bit of an idiot, but they are definitely one of those bands who don't seem to have dated.  Perhaps it's because they had their own sound and no one else has been able to do it better since.  Great band.  And to be fair to Jim Morrison, his lyrics do have a poetic quality that lifts a lot of these songs out of the ordinary.

“Don’t Look Down” / “The Booklovers” – The Divine Comedy

I like to mock Neil Hannon.   After all, and as he cheerfully admits, he does rather owe his whole act to Scott Walker.  I was listening to "Promenade" this week, an album that I bought about 20 years ago on the back of 5 star reviews across the board.  It's really very good, probably as good as anything he has done since.... but here's the thing... these two songs kind of encapsulate what is both good and bad about the Divine Comedy.  They're catchy and they have interesting lyrics.  Good.  But at the same time, they are achingly pretentious.  Take these lyrics from "Don't Look Down":

"And then a God who really ought not to exist
Sticks out a great big hand
And grabs me by the wrist
And asks me "why? " and I say
"well god, it’s like this
It may be arrogance
Or just appalling taste
But I’d rather use my pain than let it all go to waste
On some old God who tells me what I want to hear
As if I cannot tell obedience from fear
I want to take my pleasures where and how I will,
Be they disgraceful or distasteful or distilled
And to be frank I find that life has more appeal
Without a driver who’s asleep behind the wheel"

Clever?  Well certainly written by someone wearing his cleverness heavily, that's for sure.  And "The Booklovers"?  Well look at the fan video I've linked above... each named author has a little picture... as if knowing who they are means that you are clever.. which I think is what Hannon is driving at too.  Oh look at how many clever authors I can list!  The listing of each author in the song is accompanied by an amusing little snippet.  Again, I think this is supposed to be clever, but it's a sort of student, know-it-all cleverness that grates with me a bit.  Mind you, to be fair to Hannon, I very much like both songs and it's an excellent album, so....

“Kingdom of Rust” – The Doves

A band that I don't listen to often enough, but when I do, I'm reminded of how good they are and how I ought to listen to them a lot more often.  They're properly melancholy and dour, aren't they?  Of course I like them!  That's the kind of miserable shit that I always like.  And yes.... with the Doors, the Divine Comedy and The Doves, I really have been working my way alphabetically through my iTunes library this week, haven't I?
*shrugs*

That's it.  Glastonbury tickets go onsale on Sunday, so wish me luck with that and, if you're trying, then the best of luck to you too.  Hopefully I'll see you in a field next June.
Have a good weekend, y'all.
Posted by swisslet at 19:15