But of all the dead volcanoes on Earth you just happened to retch and roll through mine... 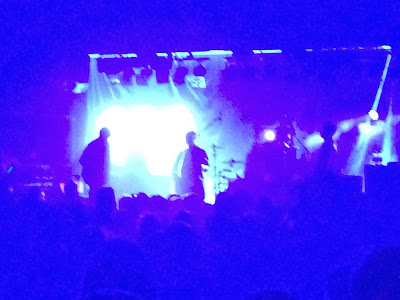 Everything Everything @ Rock City, 22nd October 2013

It used to be that there was a minimum academic requirement for entry to University: anybody from any background was able to attend, the only barrier being academic achievement. Those days, it seems, judging from the state of Nottingham town centre last night, are long gone. There’s nothing particularly new about Monday being a huge student night out, but back in my day, we were bright enough to be able to manage our own bar crawls without the need to pay for someone with a clipboard to accompany us and to manage our itinerary on our behalf. Last night, Nottingham was packed out with huge groups of marauding students in mostly nautical-themed fancy dress (although props to the girls wrapped in plastic covering filled with inflated balloons that were out as packets of Jelly Belly jelly beans). Every single group seemed to be accompanied by a sober companion in a red jacket with a clipboard shepherding them from venue to venue. O Tempora, O Mores! To be fair though, a town centre filled with extremely drunk students produces a much more amiable and less threatening atmosphere than the one produced by some of Nottingham’s other residents on a Friday or Saturday night.

It’s been a little while since I went to a gig… and it’s been even longer since I went to one in the company of my lovely wife. She’s not a massive music fan, on the whole, preferring classical to contemporary and usually finding better things to do with her time than drinking sub-standard beer and getting a bad back standing at the back of an uncomfortable venue. She likes Everything Everything, though… perhaps as a result of my fairly relentless campaign of playing them at every opportunity in the kitchen or in the car. It was “Kemosabe” that got her hooked. Something about the rather odd turn of phrase, “genuflecting in a penitent way” got her interested, and that was enough for me to encourage her to come with me to watch them live.

It was “Kemosabe” that hooked me too. I heard “Torso of the Week” played fairly regularly on 6Music, but then one day they played “Kemosabe” too, and it’s one of those songs that stuck in my head almost immediately. I often talk about how “I Bet You Look Good On The Dance Floor” had me dancing in the shower the very first time that I heard it, and “Kemosabe” was another of those rare songs that really seem to strike a chord from the very first listen. There’s something about the tone of regret and desperation in the lyrics that really stayed with me, and that was more than enough to take a chance on both their albums. I was quickly keen to see them live and was rather hoping that they would appear somewhere on the bill at Glastonbury…. Which they did…. But the scheduling was such that I had to make a Rolling Stones priority call and hope that they toured soon. Luckily for me, they did.

Rock City is one of my favourite venues: it’s a real bear pit and, if you’re tall like me, you get a good view of the band more or less wherever you stand. It’s not been quite the same since they changed (improved!) the air conditioning, and although tonight’s gig was apparently a sellout, there looked like there was a fair bit of room around the edges. Time was when you would come to a sell out gig to a band-of-the-moment like Bloc Party and you would really have to fight your way into the main stage as soon as you got to the top of the stairs. Not any more. Perhaps they’ve changed the capacity. It’s been a few months since I was last here, and it took me a little while to even notice that they’ve taken out the stairs to the balcony that used to dominate one side of the room and really affect sight lines to the stage. It’s completely gone. All good.

Support was from the Dutch Uncles and Outfit. Apparently, both are good, but the ten minutes of Outfit I saw left me cold and I’m afraid that I was unable to see past the fact that they looked like a maths club outing. Luckily, those drunk students needed somewhere to go later on, so we didn’t have to wait long for the main event.

I’ve heard that Everything Everything can be somewhat variable live, with singer Jonathan Higgs’ falsetto vocals being a little hit and miss. Well, I can only say what I saw, and last night they were really, really good. Really tight and with Higgs nailing pretty much every single sustained high note that he went for. Excellent backing vocals too. They basically played both of their albums in their entirety, with the older stuff in particular being gleefully embraced by an audience that was clearly up for it. “Photoshop Handsome” almost brought the house down. That falsetto makes the lyrics a little hard to make out and puts the band into serious mondegreen territory, but that didn’t stop most people near us having a go at shouting along to every song. It was quite mixed crowd too: from my position at the back of the room, it was easy to see that the band have been on 6music playlist. It’s always good to see you’re not the oldest person in the room, after all…. But as soon as the band got going and the main floor right in front of the stage started really pumping, it was clear that the kids were here in force too and it wasn’t just us old guys. It was only a Monday night and they were throwing themselves around with abandon…. Still, at least none of them were in any kind of nautical fancy dress. Not that I could see, anyway. With them moshing and us old fellas nodding along at the back, the atmosphere was fantastic.

The band are about two weeks into their tour now; long enough to perhaps be in danger of going through the motions. Luckily, this was one of those gigs where, about halfway through, the band seemed to realise how into it the audience were, and they began to feed off that, really transmitting their enjoyment back to the crowd, who in turn gave it back in spades. We were repeatedly told that we were the best crowd of the tour. He doesn’t just say that at every gig, right?

They were really good. For a little while I was in danger of being distracted by a couple of twats intent on a shouted conversation rather than watching the band, but before too long the band were simply much more compelling than the distractions. Such was the sustained quality of the show that it’s tough to pick out favourites: “Torso of the Week”, “QWERTY Finger”, “Duet”, “Kemosabe”, “Photoshop Handsome” and an epic, raucous “Cough Cough”.. yeah, pretty much everything. The band were superb. They’re interesting, quirky and, at times, really quite loud…… Arc is my favourite album of 2013 by some distance and it was a real pleasure watching the band storming it live. Recommended.