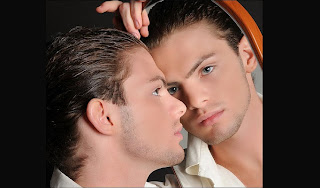 Since I’ve been cycling to work, I’ve naturally been spending a lot more time in the locker room at work. I’ve had a locker there for a while now because of my occasional lunchtime runs, but now I’m clearly in there a couple of times every day and not just once a week when I've popped out for a run. It’s nothing too fancy, as changing rooms go, but it’s pretty handy to have access to a proper, hot shower and somewhere to store your sweaty kecks whilst you’re working.

As you’d imagine, the clientele here are nothing like the people who frequent the changing rooms of my gym…. Or so you would think.

At the gym, I’m constantly amazed at how some guys seem completely unconcerned by their surroundings and think it’s okay to stand, butt naked, in front of the floor-length mirrors, gently massaging body lotion into their chests or carefully teasing their hair up to make sure that they look their best before hitting the gym floor. There’s also a lot of walking around topless, wearing only a skimpy towel or - much worse - a tiny pair of budgie smugglers, displaying your guns to anyone who looks like they might be even passingly interested. Apparently this is a thing in our gym, my wife informs me.  To be honest, they're so aggressively on display that I’m a little scared to make eye contact with some of them. For some reason, the guy who runs C’s ballet class seems to have taken a shine to me, and when we’re in the sauna together I find myself looking fixedly at the floor as he tries to catch my eye. I’m sure he’s lovely, but it’s really hard to concentrate when someone is wearing trunks like that....

Anyway. At the office changing rooms, people are mostly focused on just getting ready for work, and haven’t really got much time for preening and selling tickets to the gun show. Sure, there’s a bit of ridiculously over-macho talk about the training you’re doing for your next race, but that’s probably only to be expected. I’m sure at least some of these people read Men’s Health too and are keen to find out the latest way of getting a six pack within six weeks. There may even be a few metrosexual males, but as they’re putting on a shirt and tie and rushing off to their first meeting, they haven’t really got much time to display it.

Or so I thought....then, as I was changing the other day, I noticed a guy slowly getting dressed by his locker, making fierce eye-contact with himself in the big mirror. He didn't look away from his reflection once and was clearly mesmerised by himself: he admired the way he carefully buttoned up his shirt, turning slowly to admire his side-profile as he tucked it into his trousers. Yes, he clearly thought, I look pretty damn good today. He paused to tease his hair, before giving himself a final, lingering look up-and-down, imperceptibly nodding his satisfaction with himself before reaching into his locker for his shoes.  If he had another pair of lips, he'd kiss himself.

Mind you, whilst this little ritual was going on, I couldn’t help but notice, as he was admiring himself and congratulating himself on how amazing he was looking today, that he had a massive hole in his socks and his big toe was poking out.

Quite the catch ladies. Catch him while you can.
Posted by swisslet at 19:57