what are we doing here if romance isn't dead?

"People say graffiti is ugly, irresponsible and childish... but that's only if it's done properly".
—Banksy 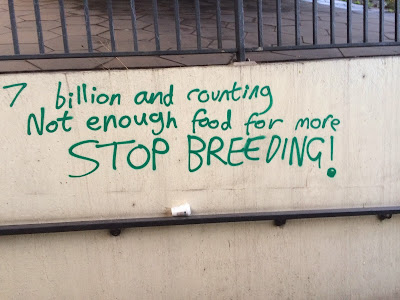 As I walked to work after dropping my car off at the garage the other day, I saw some graffiti on the subway that took me underneath the Clifton flyover.  I quite like graffiti.  It can be childish, poorly spelt and with apostrophes missing all over the place.... of course it can.   But done well, it can be witty, defiant and an all-round enhancement to otherwise oppressive and downright ugly functional concrete architecture.

The message above is on a tunnel underneath the ringroad from one industrial estate to another.  I don't know how well-travelled it is, but there isn't anything residential for miles around.  Probably the biggest source of pedestrian traffic through here are the people on their way to the five-a-side football pitches.  I don't wish to cast any aspersions, but I rather fear that the average clientele of Powerleague aren't all that fussed by the politics of over-population.

Still.  I like it.  It's well drawn and it's got a message.  It's maybe not the best way to bring about a radical change in the global population, but it's better than staring at a concrete wall.

This particular bridge has form: this was up here in 2006. 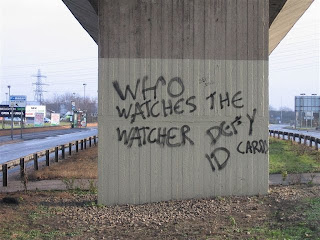 Graffiti that references both Juvenal ('Quis custodiet ipsos custodes') and Alan Moore?  What's not to like about that?  Am I dreaming a similarity in the handwriting there?

My favourite piece of graffiti here was quite different through: 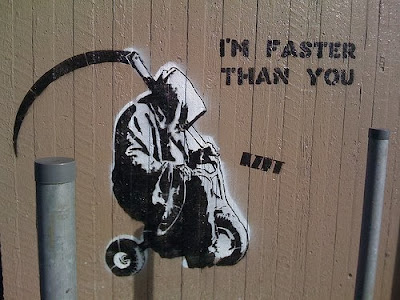 That's funny, for sure - especially as it must have been seen by thousands and thousands of rush-hour commuters in their cars - but it's also a beautifully drawn momento mori; time's winged chariot is drawing near... why shouldn't his chariot be a tricycle?

The council paints this stuff over.  Well, I suppose they must prefer beige paint over concrete to graffiti of any kind, no matter how interesting.  Now, I'm no art critic, but..... this isn't just brainless tagging, is it?  But what do I know?  Maybe the council have their own in-house Brian Sewell to pass judgement on each according to their own merits?  Well, you can see what they're thinking: one day someone will tag one of these characterless concrete carbuncles and totally ruin it.
Posted by swisslet at 22:27