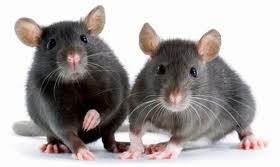 What is it that they say?  That you're never more six feet away from a rat?  If that's the case, how come you don't see them more often?  A couple of years ago, the cat went through a phase of staring obsessively down a drain cover outside our house, and the only conclusion we could draw was that she might have caught a brief glimpse of a rat down there and was hanging around in case it ever came back.  Other than that, and it hardly counts, I can't remember seeing one at all.  I've caught glimpses of them in London, around the underground and occasionally in the street, but around here.... nothing.  But every six feet?  If that's true, then where on earth are they all hiding?

Apparently the statistic is more like a rat every 164 feet, but that doesn't have quite the same ring to it, does it?

Actually, since I started cycling to work, I have seen a lot more rats.  Most of my cycling takes place on cycle paths alongside the river Trent, and if I cycle to the gym, then my route takes me straight down the canal towpath.  Since the evening's have got darker, there's at least one place on my route where I'm starting to see rats quite often: down towards the lock where the canal meets the river Trent, there's a bit underneath a bridge where, as often as not, I see a few rats.  They're usually pretty surprised to see me and they either weave between my wheels and back to the safety of their hiding place underneath the bridge somewhere, or they just jump headlong into the canal.

The thing is, they're actually pretty cute.

I know we're supposed to have a conditioned response to the presence of rats, and I didn't think I was any different to anyone else in this regard.... it's just that they're brown rats, pretty clean from a life spent in the water, and they have these pretty white bellies.  I like animals, and I get a real sense of wellbeing from observing animals of all kinds in the wild.  I've enjoyed our trips to Africa and places like that enormously to get the chance to observe leopards, elephants and the like... but truth be told, it doesn't have to be an exotic location.  I also get a thrill watching a fox playing in our street from behind our bedroom curtain in the small hours of the morning; from hearing a family of magpies laughing at my cat from as they perch on our roof; from seeing a squirrel bouncing across the path and scampering up a tree.... When I see things like that, just for a moment, and in the middle of my busy urban life, I feel a little more in-tune with the rhythms of the natural world.  It gives me an enormous sense of wellbeing...

Rats?  Well, I don't want them in my house especially (although, to be fair, neither do I want foxes, magpies of squirrels in my house... never mind leopards or elephants).... but, you know what? seeing rats scampering around on a canal towpath is okay with me.

Mind you, I don't live on the narrowboat that's moored down there....
Posted by swisslet at 19:16