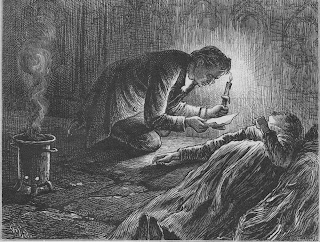 The guys in my team at work are so young - mostly in their early 20s - that they simply do not have the same frame of reference as me and frequently look at me as though I have beamed down from another planet or - more likely - have somehow been transported into their lives from the distant past.

I'll give you an example: I mentioned in passing the other day that we used to get ice on the inside of windows when I was a kid.  I thought it was an innocent enough remark, but I looked up to find everyone gawking at me with open astonishment.  They just could not believe that such a thing could ever be possible.  Of course, they all grew up in a world where everyone has double-glazing.  Why should they imagine anything different?  I wonder if they even know how to open a sash window?  Until I was about 7, I didn't have a duvet either!  Imagine that!  These kids haven't generally experienced much of foreign cultures either, choosing instead to holiday in sheltered resorts on all-inclusive deals.  Another colleague told me the other day that she felt she had "done" Egypt now.  She's been to Red Sea resorts twice and has never seen the Pyramids or Cairo or anything like that.  Well, once you've sunbathed at the hotel pool and gone quad biking in the desert, what else can Egypt offer you?  Best head to Greece to not visit the Parthenon, eh?  I remember another colleague telling me about how she went on an "off-resort" trip on an all-inclusive holiday to Caribbean.  They visited some locals and she just could not get over the fact that the hut they visited didn't even have a carpet.  Wide-eyed she looked at me and asked me to imagine being so poor that I couldn't even afford a carpet!

I decided to play around with them a bit.
"But, you know, we didn't have electricity when I was at school either"
They believed that too.  Without even a single bloody question.
"Well", said Chloe (23) when I said electricity was becoming common in the late nineteenth century, "I just assumed you went to a very rural primary school".
**sigh**. 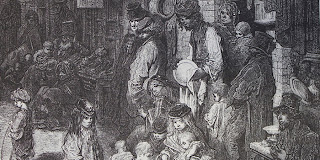 A scene from my childhood.
I swear these incurious bloody children think I come from Dickensian London or something.
Posted by swisslet at 19:48