reminds me of childhood memories... 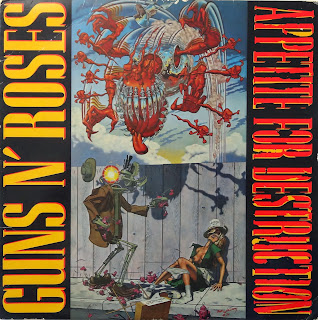 I know I'm talking about music a lot at the moment, but I'm afraid that one of the consequences of buying a record player has been that I am reconnecting with the whole experience of listening to music on an album-by-album rather than song-by-song basis.  Still, from your point of view, I suppose it at least makes a difference to me harping on about running or somesuch.

My record buying policy is generally to either buy albums that I don't actually own in any format - like Folsom Prison or Live at San Quentin by Johnny Cash - or to buy albums that I absolutely love but may already own.  At the weekend, I visited the Music Exchange in Nottingham and picked up a couple of the key texts from my youth, both in gloriously heavy 180g vinyl editions.

My only copy of "Appetite for Destruction" is actually a rather scratched CD.... so scratched, in fact, that the ripped copy in my iTunes library is missing "My Michelle".   I bought this album on cassette in 1988 and listened to almost nothing else for nearly a year, until the release of "Pump" by Aerosmith finally broke its tyrannical grip on my stereo.  I'm sure you don't need me to tell you that it's an absolutely blinding record, perhaps one of the best debuts ever released.  Forget the awful mess that was to follow, this is an almost perfect record that still sounds pulsatingly vital today.  My copy boasts that it is a "Premium Audiophile Pressing on Heavyweight 180g Vinyl in All Original Packaging!"  Well, given that it doesn't feature the cover above, this is a lie.... but it does come with the familiar black cross tattoo artwork, and the songs are the same, so....

It's a brilliant album. 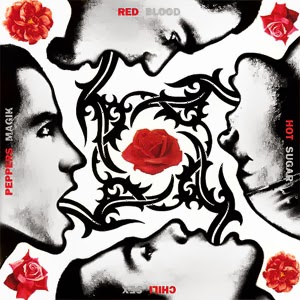 You know how sometimes the strangest things can trigger surprisingly vivid and specific memories?  A few years back, I went to visit an old school, and the smell of the changing rooms unexpectedly took me back to being about 8 years old.  Listening to my other weekend vinyl purchase has much the same kind of effect, taking me back to the sixth form at school and listening to music, drinking coffee and eating Jaffa Cakes.  I actually discovered the Red Hot Chili Peppers through 1989s "Mother's Milk", but it was 1991s "Blood Sugar Sex Magik" that had me hooked.  They've done better albums since, but this is the album that reminds me of being 17 years old.  When I put it on and listened to it all the way through for the first time in years, I was slightly surprised to find that I was still word perfect on many of the tracks and found myself happily singing along:

I've got a mellowship, I've got a fellowship
I've got a nonstop "Yo swan" hello chip
Born to adore the big bad bison
Thunderstorm and a man like Tyson
Popcorn peanuts lookin' at big butts
No I cannot keep my mouth shut
Rockin' to the beat of the fabulous forum
My Lakers I adore 'em

[Mellowship Slinky in B major]

It's probably just as well that I'm on my own tonight, eh? The cat's disapproval of such things can surely be taken as read.

Another superb album that still sounds pretty fresh today (even if the band themselves don't sound quite the same since John Frusciante left).

Both BSSM and AFD played a massive part in my musical education and it feels great to listen to them again on vinyl with fresh ears.  If getting a record player has done nothing else for me, then it's been worth it just for that.

By way of contrast, my other purchase of the weekend was "Bish Bosch" by Scott Walker.  It's supposedly the third and final part of a trilogy of albums by Walker that also includes "Tilt" and "The Drift".  I haven't listened to it yet, but if it's anything like those other two albums, then it's not exactly going to be easy listening and may feature percussion on a slab of meat.

Well, it's good to mix it up a little from time to time, no?

Incidentally, whilst we're on the subject of discovering vinyl, what's with some records having a hole smaller than the spindle on the deck?  What's that all about?  That certainly never happens with MP3s, and it looks like I may be doomed to listen to side A of "Hatful of Hollow"over and over again for the rest of my life.  It could be worse, obviously, but there are so many other things I want to listen to as well....
Posted by swisslet at 19:36

Email ThisBlogThis!Share to TwitterShare to FacebookShare to Pinterest
Labels: back in the day, music, records and all that shizzle