I was reviewing the latest EP by a local band this afternoon.  I quite like Tribute to Nordberg, actually.  When I reviewed their debut album in 2012, I thought that they sounded a bit like Pearl Jam.  Their new EP sees them sounding a lot more like Badmotorfinger-era Soundgarden, albeit with a singer who isn't anywhere near Chris Cornell's league - although not many vocalists are.  For a local band who are presumably funding their own recordings, some of the guitar work here is fantastic.  Still, once the review was done, I did go scurrying straight back to my Soundgarden albums to have a listen to an album I haven't really played since my first year at University.  They were pretty good, eh?

"Everything in its Right Place" - Radiohead

I like the idea of liking Kid A, but I honestly can't quite bring myself to like the actual thing.  It feels like half a good album - perhaps with Amnesiac being the other half.  Radiohead are such a good band that I just find this dabbling with electronica a little bit aimless and a long way short of their best stuff.  Still, that's not to say that there aren't any good songs on these albums, because their plainly are.  I have been craving listening to this song in particular, which is excellent... but whenever I'm looking for an album to play when I go running, I pause at Kid A and then carry on looking for something else.  I'm not sure I want this stuff soundtracking me plodding up a hill and search for something a little bit more engaging instead.

We watched "Le Week-End" the other day.  It's a lovely film with two superb central performances from Lindsay Duncan and Jim Broadbent, but it was quite hard to get away from the description given to us by a friend that it reminded him throughout of my wife's parents.  Nick Drake features prominently on the soundtrack, which is clearly a good thing.  The ending actually reminded me of "A Serious Man", in that it stops quite suddenly and without a neat conclusion.  None the worse for that though.

I usually listen to the Tori Amos cover of this, but I dug the Stranglers out the other day and gave the original a spin.  I was pleasantly surprised when we saw them at Glastonbury a while back to remember quite how many good records they've made.  "No More Heroes" and "Golden Brown" are amongst the very best, of course, but they kept playing song after song that made you stop and think, Oh yes... they did this one too.  Anyway.  Good song this!  Made me glad that I'd skipped on Kid A to listen to something else instead!

"Scoundrel Days" really is a superb record, isn't it?  It has a special place in my heart, of course... being one of the very first albums that I ever owned on cassette.  It still sounds magnificent, though.  There's very little on here that sounds especially dated, and Morten Harkett's vocals still soar.  I wouldn't ever say that a trip to QMC was uplifting, but having this playing on the stereo as we drove there helped a little bit.  Lots of people in wheelchairs, but that's a story for another day.

I was the lucky recipient of a lovingly made (and illustrated) mix CD from a dear friend in Ireland and her daughter.  Lilly is five and was very keen to stretch her playlisting muscles, which has resulted in a few interesting choices..... but I love it.  Even that weird Irish Tom Jones-on-the-cheap being all creepy to a pretty lady.  You can't go wrong with this though, can you?  I have a t-shirt that references this TV programme actually. 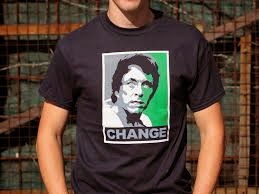 Seems to be lost on a lot of young people, but hey!  that's hardly my problem, is it?

Another artist near Radiohead in the A-Z on my iPod that has benefitted from my reluctance to listen to Kid A.  I bought Original Pirate Material when I heard The Irony of it All playing in Selectadisc (RIP). I saw him playing live in Rock City in about 2001 as part of One Live in Nottingham too, and he was superb.  Not something that you would think was exactly my cup of tea, but that album still sounds incredibly fresh today, even in the post Dizzy Rascal and Tiny Tempah world.  Mike Skinner was doing that kind of stuff fully fifteen years ago.  I enjoyed listening to that album so much that I went directly on to A Grand Don't Come For Free, which also still sounds fantastic and is probably the best "concept album" in my collection.  It went mostly downhill from here, in all honesty, but at his best, he was pretty damn good, eh?  I tried to get a bit of quiet at my desk at work yesterday by sticking my headphones on to get some work done.  It took me about two hours to get through Too Much Brandy alone because I kept getting interrupted so often.  Pah!  Stupid job.

One of my ertswhile colleagues was moaning on Facebook the other day about how much he loves 6Music but loathes their love of 80s artists like Julian Cope and Lloyd Cole.  Well, I don't know about Cope (although someone who loves Scott Walker can't be all bad), but I heard Shaun Keaveney playing Rattlesnakes on his breakfast show the other day, and I was thinking what a bloody good record this is.  Actually, this is another song that I discovered through a Tori Amos cover.  A cover, I should add, that I like at least as much as the original.... I can take or leave a lot of Lloyd Cole's stuff, but this is a fantastic song with interesting lyrics.  Have I ever mentioned how I'm a lyrics man?  I have?  Well, anyway.

She looks like Eve Marie Saint in On the Waterfront
As she reads Simone de Beauvoir in her American circumstance
Her heart, heart’s like crazy paving
Upside down and back to front
She says "ooh, it’s so hard to love
When love was your great disappointment."

Speaking of interesting lyricists... Tim Booth.  We listened to James as I drove my wife to hospital to have her wisdom teeth taken out on Wednesday morning.  After a long day (for both of us, but especially for my poor, swollen wife), we listened to the rest of the album on the way home.  I think it was the Best Of, but the latter half of the record is quite melancholy, and somehow it suited the mood beautifully.  I remember very clearly listening to Laid when I was a student in Venice, and then as now, the song that really grabbed me was "Sometimes".  I'm not sure that the lyrics mean anything in particular or are even particularly connected, but they're beautiful nonetheless.