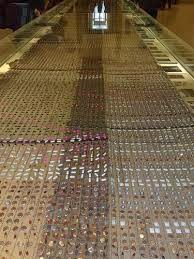 When we were in London the other week, we spent an interesting couple of hours on Sunday morning in the British Museum.  We often visit the Natural History Museum when we're in town, but as a historian, I find myself drawn to another of the capital's vast, Victorian repositories of stolen goods.  The British Museum is particularly brazen in this regard, and seems to be above all else a tribute to the sheer brass-necked thievery of the British Imperial past.  Never mind the Elgin Marbles, what on earth are we doing with a huge basalt statue taken from Easter Island?  Donated to the museum by Queen Victoria, although quite what business she had with it in the first place is another matter.

It was raining and the place was swarming with tourists, so we took a decision to avoid the obvious choke points like the Rosetta Stone and the Egyptian mummies and to head to less obvious sections to explore.  I very much enjoyed the Medieval Europe section, especially an intricately carved wooden instrument - a citole - that appeared to be a hybrid between a guitar and a violin and had some astonishingly detailed, tiny wooden carvings.  There was also the usual array of impressive classical statuary.... question: were these sculptures modelled in freezing cold rooms, or did they all have tiny cocks?

Anyway.  The thing that really made an impression on me during our visit was an installation called  Cradle to Grave by a collective of artists called Pharmacopoeia (Susie Freeman, Dr Liz Lee and David Critchley) and dating from 2003.  As the British Museum website explains:

"Cradle to Grave explores our approach to health in Britain today. The piece incorporates a lifetime supply of prescribed drugs knitted into two lengths of fabric, illustrating the medical stories of one woman and one man.  Each length contains over 14,000 drugs, the estimated average prescribed to every person in Britain in their lifetime. This does not include pills we might buy over the counter, which would require about 40,000 pills each.  Some of the treatments are common to both: each starts at birth with an injection of vitamin K and immunizations, and both take antibiotics and painkillers at various times. Other treatments are more specific. The woman takes contraceptive pills, and hormone replacement therapy in middle age. The man has asthma and hay fever when young, but enjoys good health until his fifties. He finally stops smoking after a bad chest infection when he is seventy. He is treated for high blood pressure for the last ten years of his life and has a heart attack and dies of a stroke in his seventies. He takes as many pills in the last ten years of his life as in the first sixty-six.  Cradle to Grave also contains family photographs and other personal objects and documents. The captions, written by the owners, trace typical events in people's lives. These show that maintaining a sense of well-being is more complex than just treating episodes of illness." 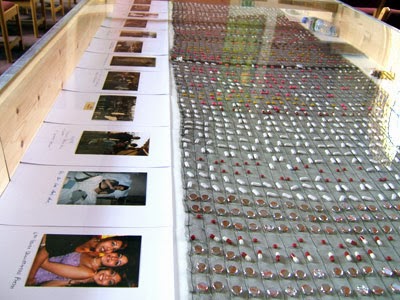 It's astonishing.  Initially it's a lot to take in, but as you wander down the exhibit, looking at the drugs and the photos that sit alongside them, you really start to get a feel for the individual and the role that medicines have played in their lives.  Look at how the contraceptive pills and hormone replacement pills are replaced by a breast cancer treatment.  It's a remarkable sounding statistic, but when all those pills are all laid out like this, you can really see what it means to take as many pills in the last ten years of your life as in the first sixty-six.  One side ends suddenly with death, and the other side is still going strong, presumably continuing to add pills to the list.  It's a remarkable exhibit.

As I took it all in, I suddenly became aware that I was feeling mortal.  I'm not sure if I've ever really experienced this emotion before.  I wouldn't say that it was unpleasant, exactly, but it was a little bit unsettling.  I think it was as I looked at the pictures of the man ageing and looking as his tally of pills really started to mount.  He was young and fit and healthy, then he got old, then he really faded away and died.  In those last few photos, he looks like a ghost; a shadow of the man he was earlier in life.  It's emotional: you're looking at someone's whole life and it's hard not to be moved by that and to reflect on your own journey.

I turn forty next month, and more than ever before I'm aware of the failings of my own body.  My own personal medical journey has seen me taking more drugs in the last five years or so than probably in the thirty-five years before that.  I hope there's plenty left in front of me yet, but the pile in the display behind me is really starting to mount up.  I wonder what people looking at the photos of my life would think as they browsed their way down and start looking at the pile of syringes that start at 35 and pile on into the indefinite future.

I'm not really bothered about getting older, I don't think.  My team at work tease me about it all the time, but I'm not sure I'd want to be their age again for all the tea in China.  Why?  Because I think I'd lose a lot more than I would gain.  It's not really ageing that worries me, I think it's the realisation that I'm not immortal.

When it comes to immortality, I'm definitely from the Woody Allen school: "I don't want to achieve immortality through my work. I want to achieve it through not dying."  Not because I want to live forever, you understand.  Can you imagine?  That would surely be awful.  No, it's because it's a really clever thing to say and I wish I'd thought of it for myself.  Similarly, when the end does come - as it must - and the priest at my deathbed is asking me to renounce Satan, I sincerely hope I have the presence of mind left to steal from Voltaire and to say "Now is not the time for making new enemies."

A mid-life crisis would be tedious, wouldn't it?  Let's try and avoid that if we can.
Posted by swisslet at 20:04