As we continue the 10th birthday celebrations, I thought I'd come back to a post that I often think of; a post that confirms once and for all that this is not a sophisticated establishment. Of all the many things that I have written here, this has to be one of the low high points.... 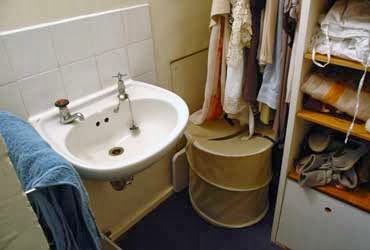 I'm now going to seriously lower the tone: if you are of a nervous disposition, or if you harbour delusions that I am some kind of sophisticate, please look away now.

Who am I kidding? You're all still here, aren't you? Nobody thinks I'm a sophisticate?

I have a question for you.

I was inspired by something that Charlie wrote over on Late Night Radio (one of the first blogs I ever found, actually. Discovered using the "next blog" button and still a regular read).

Over to you Charlie:

"after years of reluctance, and after the longtime recommendations of all 3 roommates and several of my friends, I finally found an opportunity and peed in the shower last night. I didn't like it, and don't think there will ever be an encore."

As I said over there, on the one hand, that's gross. On the other hand, his roomates have clearly been pissing in his shower for months, so it's partial payback, right?

Before you take the moral high ground here, think on this:

Did you ever take a piss in that sink?

Come on now. Be honest. You can tell me.

Some of the best bits, of course, came in the comments that followed:

Damo: Ben Elton's never been that funny a comedian. But he once told a story about how he got embarrassed when he was in a public loo cubicle and he took a dump - he couldn't have anyone else hearing the noise. So beforehand he laid paper down on the water, which deadens it. At this point he looked round the crowd, hoping for recognition that he wasn't the only person that did that. Well personally I never have. But I now feel like Ben Elton must have done every night on that tour when he found out that he wasn't the only one. Because I too had a hall of residence room with a sink. And did I REALLY want to get dressed every time I needed the loo in the night? Naaaaaaaaaaah.

Guilty. And anyone here who had the opportunity and says they didn't is a liar... I hope...

Mark: Yes. It was one of those hotels with a toilet shared communally at the end of the corridor. I couldn't be arsed walking 5o yards just to go. Not proud of it, but there you are.

Des: Yup.  Halls of Residence are a very conducive to this kind of behaviour.....sink in the room, but loo 30 yds away....was there ever any doubt at 0200 on a Sunday morning in Newcastle, ne fooking chance man!

Jenni: I've never done that, but maybe it's a bit different for women? I did, however, live next to a girl in my dorm who wouldn't take her finger and toenail clippings to the trash bin, but would instead just drop them on the hall carpet right outside her door. Oddly, I am more okay with the thought of someone else peeing in the shower/sink than with stepping on someone else's toenails.

Di: Um... I thought everyone pissed in the shower.
Am I a non-girl? Do I get banned from the fraternity now or something?

Bee: Of course it's possible for a girl to have a wee in a hall-of-residence-room-sink. All you need is a chair to stand on. And yes, I do speak from personal experience. The toilet on the 1st floor of Furzedown was VILE (and so were quite a few of the people who lived on the same floor ...)
Also, I can recommend the lining-the-toilet-with-a-piece-of-paper thing mentioned by Damo. It not only minimalises the sound, it also lessens the chance of skidmarks and eliminates splashback.

LB: I would like to also heartily comment the use of toilet paper as a sound insulation device for pooing in public toilets. As is running the cold tap very fast if you are in someones house and there is a chance they may hear you...and as for the shower. well. if you haven't done that, you're a liar.

John: There was a guy on our uni golf team who got the nickname 'sinks' - for months, no one would tell him why. Finally, someone got sick of him asking and told him that, when he'd been standing at the sink in his room with his curtains open in the first week of term, someone on the same floor of another building had happened to look across and see him doing what he was doing.

Ka: The first time someone told me that they didn't pee in the shower, I was shocked! You don't? It's gross? REALLY? I mean, it's not like peeing in the bathwater and sitting in it for an hour - the entire point of a shower is rinsing ick away. Isn't it?
I feel vindicated by your post and your readers, SwissToni.

We lived in simpler times back then, friends.  Happier times.  Cleaner times?  Ok, maybe not.
Posted by swisslet at 19:40

Email ThisBlogThis!Share to TwitterShare to FacebookShare to Pinterest
Labels: back in the day, blogging, old