I saw The Feeling for the first time around about my birthday almost exactly eight years ago.   "Sewn" was sitting at number 7 in the singles chart, and although they were playing a tiny venue, they were clearly a band on their way up.  Their loving resurrection of the soundscapes of 10CC is pretty much impossible not to like, I would say, and although "Sewn" was the only song that I knew that night, there was plenty to like about them as a band.  At that gig, as LB and I were standing at the bar, we were chastised by singer, Dan Gillespie Sells, to stop being so cool and to clap our hands.  We did.  They're that kind of band.

I've seen them a few times since that night, over the years.  iTunes tells me that I have two of their four albums, but to be honest, it's all about their debut album for me: "Twelve Stops and Home" is just packed full of completely irresistible, joyous pop songs.

The Feeling are not a cool band.  They never have been and I doubt they ever will be.  Fast forward from 2006 to 2014 and this lack of coolness is reflected in the audience at the Rescue Rooms tonight.  I think that the coolest gig I've ever been to was Bloc Party at Rock City.  They were music press darlings and I've never seen the place as rammed with beautiful people as it was that night.  The Feeling attract a very different kind of crowd.  There's a pretty wide age range: the youngest are probably a bit older than the average Jake Bugg audience, but at forty, I'm definitely not the oldest person in the room by some distance (Gillespie Sells himself is no spring-chicken.... a well preserved 35 years old).  There's not really a nice way of saying this, but we're not a cool crowd.  We seem pretty wholesome, but we're wearing sensible jackets and sipping on a quiet half.  There's nothing wrong with that, but we're not exactly edgy, and I think that suits the band fine.

Quick mention for the support band here too. The Gentlemen are fronted by a slightly tubby guy with ginger hair wearing entirely the wrong clothes for a man of his shape and colouring: saggy-arsed trousers and a too-tight skinny shirt.  They come on and start playing something that sounds uncannily like 1980s Imperial era Phil Collins.  I was all prepared to laugh, but the band are all very accomplished and the singer is so wide-eyed and enthusiastic about the whole enterprise, that it's impossible not to like him and to want the band to do well.  The main job of a support band is to warm the crowd up for the main act.  Some people seem to resent that, and lots of audiences just ignore them completely.  The Gentlemen finish their set with the whole crowd paying attention to them and go off to warm applause. Who could ask for more than that?

By the time The Feeling come on, the Rescue Rooms are politely busy - pretty full but not sold out, I would say.  They're touring a new album, and open tonight with the title track, "Boy Cried Wolf".  They've also been a technically excellent band, famously forged as a covers act playing in French ski resorts, and they still sound good. The set is a mostly happy mixture of new songs with old favourites like "Rose", "Fill My Little World", "Sewn", "I Thought It Was Over"... they also play a medley that includes "Daytripper", "You Really Got Me", "Pinball Wizard", "Another Brick in the Wall Part Two", "Under Pressure" and "Parklife".  Every single one of those songs delivered with such gusto that I leave determined to dig out the originals when I get home. 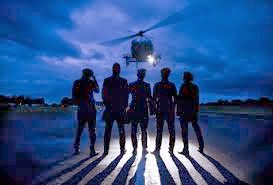 Best of all is "Love it When You Call'.  If you don't like this song, you don't have a soul.  I'm wearing an Iron Maiden t-shirt tonight, probably because I want to silently inform people that I normally listen to much cooler music than this, but the simple truth is that this record makes me happy and is so joyful that it gives me goosebumps.  It's a brilliant record.  God knows I listen to enough miserable music by miserable bands, so let's just celebrate the simple pleasure of a song so gloriously upbeat.

The Feeling are not a cool band - and the vinyl copy of their new album includes sheet music, for goodness sake - but they are an excellent band.