fall into me, the sky's crimson tears...

I like t-shirts.  I have a lot of t-shirts.  Too many, my wife would tell you.  As habits go, I reckon that you could do a lot worse than collecting t-shirts.  I wouldn't say that it is a compulsion, but there is something appealing about being able to display your taste quite so obviously to everyone else.  I read some really cool books and have astonishingly good music taste, but you'd probably have to know me a little bit to be aware of that.  Your t-shirts, however, are a very public form of display.  Just as life is too short and too precious to waste eating crappy food, I feel much the same way about the t-shirts that I wear.

Every single one tells a story, whether it's of a great gig that I attended, a band or film that I love or just something that makes me laugh.  A quick peak into the sports section of my collection and I have souvenir t-shirts from two Olympics (2004, 2012),  celebrating rugby, skiing, running, cricket, ice hockey, scuba diving, sky diving...; I have a burgeoning geek section (Ghostbusters, Anchorman, Alien, the Incredible Hulk, Superman, Rocky, Star Wars....); bands (Metallica, Iron Maiden, Madness, Billy Bragg, Scott Walker, Led Zeppelin, Young Knives....)

Yeah.  I've got a lot of t-shirts alright.

But I don't have a t-shirt of a vampire cat wearing a cape and bow tie, standing in front of a blood moon. 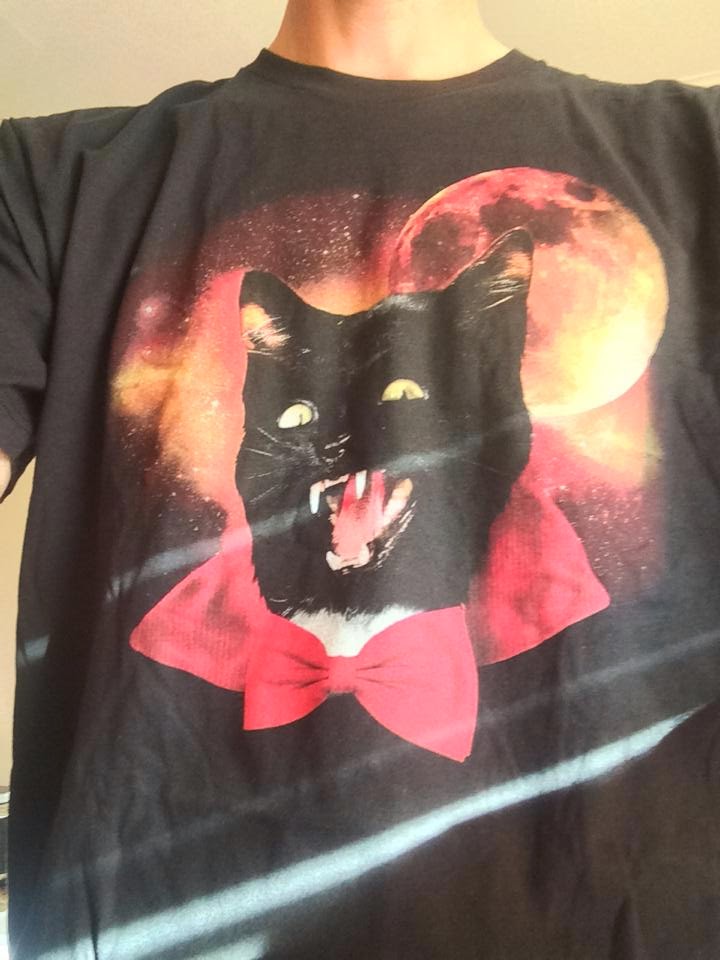 I first saw this t-shirt in a shop window in New York in January and I was so taken with it that I nearly bought it on the spot.   Foolishly, I walked away and regretted it almost immediately.  Seven months later, something made me think of it again, so I actually started looking for it in earnest on the internet.  Google is amazing, isn't it?  But honestly, using search terms like "vampire cat red bow tie moon" brings you back a surprising amount of results to wade through.

... but I got there!  You can buy it here (along with some other cool looking shirts).  I ordered it last week, and it arrived today.