I flicked the television on this evening when I sat down with my tea and saw that Raiders of the Lost Ark had just started on BBC3.  Obviously, I sat and watched it.  I've seen it hundreds of times, of course, but you can't flick past that, can you? 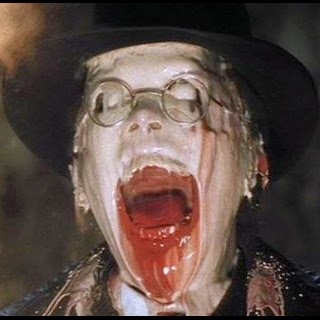 This film was made in 1981, and even though the special effects are positively Stone Age compared to what's possible today, I was watching the famous face-melting scene at the end and thinking that it's a far more effective special effect than any amount of million dollar CGI thrown at the latest Transformers movie.... because the film doesn't JUST hinge on the special effects, but has an actual plot and characters you care about and old fashioned things like that.

Then I remembered that half my team at work haven't seen this film.

Imagine that.  They all know who Nicki Minaj is (and what her fragrance smells like), but they have no idea who Indiana Jones is, and in fact they probably couldn't name a single thing Harrison Ford has done in his career.

Email ThisBlogThis!Share to TwitterShare to FacebookShare to Pinterest
Labels: back in the day, film, young people