because it's you and me, we're history... 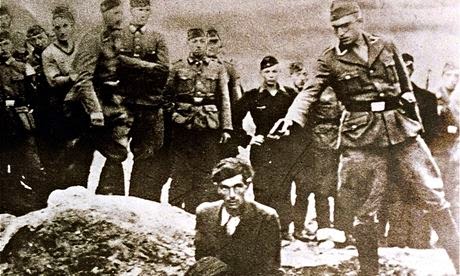 There was interesting article on the Guardian yesterday: it featured prominently at the top of the article, a Nazi soldier’s snapshot of an execution (“The last Jew in Vinnitsa.” Is apparently scrawled on the back in the handwriting of the soldier who took the picture). It’s one of those photos that immediately grabs you: a soldier stands with his gun pointed at the head of a kneeling man as a crowd of onlookers behind them crane their necks to get a better view. It’s the blank indifference in the faces of everyone in the picture that grabs me, even the face of the condemned man on his knees is almost expressionless. The author describes how seeing the photo in Berlin at an exhibition in 1990 stayed with him long afterwards:

"Long after I had returned home, I was turning over the components in my head – the victim, the executioner, the audience – haunted by the thought that, as much as I wanted to imagine I could only ever find myself in the place of the kneeling man, there was nothing in my DNA, my Glenn Patterson-ness, that absolutely guaranteed I could not end up playing either of the other roles. The only safeguard that I could see was vigilance, against any ideology that reduced human beings to the one word for which they could be murdered (Jew, Commie, Prod, Taig, Brit, Mick … or fascist, come to that); and against yourself, that you didn’t just shrug such language off. By the time the onlookers have gathered, the victim has been made to kneel and the soldier is pointing his gun, it is far too late to ask how you got here".

Predictably, the real fun was to be found in the comments underneath, where a character called Witchend pops up. They’ve seen the photo before, of course:

"Yes. I know the one. Everytime I hear mention of the Germans savagery and inhumane cruelty, thats the one which pops into my head. How anyone could do such things to people , especially innocent trusting children, is beyond me. And no. I don't believe it's an inherent 'human' trait. I believe certain cultures and people are more likely than others to allow such ghastly crimes be comitted in their name. I know we're all supposed to forget this kind of thing nowadays ( even when it happened only 70 odd years ago) and ' forgive and forget' , but this happened in Europe, by supposedly ' civilised' people. Absolutely astonishing. It should be remembered for centuries to come. Not airbrushed away.”

Not surprisingly, Witchend gets called on this, with a German poster asking  “Are you seriously trying to tell me that there is something in my culture that makes my people more likely to allow such horrible atrocities?”

Witchend replies: “I'm afraid the evidence is irrefutable. Not nice I suppose, if one is german, but just examine the actions of Germany and thousands upon thousands of Germans who contributed to these savage acts, many doing their utmost to preserve the status quo until the last bullet.”

It’s clearly a waste of time trying to reason with someone like this, who is either wilfully ignorant, or a troll (or both), but a few people have a go. Here’s Bluecloud: “If I understand you correctly, you are saying that people who tend to commit atrocities should be attacked. The trouble with that is [you] have clearly defined those people as being anyone who happens to be German. I hope you now realise how it is possible for people who think they are rational to commit acts of genocide: simply dehumanise a whole folk and it becomes easy to attack and kill them”

And that’s the point, isn’t it? That’s pretty much exactly what’s happening in this country right now with the tone of the dialogue that is happening around immigration; the rise of UKIP and the impact they are having on the immigration policies of the other parties. Only yesterday, a Conservative minister was in trouble for describing how British towns were being “swamped” by migrants and their residents “under siege”.

And today, former Labour minister David Blunkett has come out in agreement.  The success of UKIP has shifted the language that politicians are using to describe immigrants, and this in turn has washed down into how ordinary people are starting to talk. Frankly, it seems to be becoming acceptable to be a bit racist. For me, Mike Read’s UKIP Calypso was a laughable embarrassment, but in the comments of the article where I first read about it (in the Daily Express – don’t judge me, I followed a link), the comments were hateful and stupid, for example:

"There are lots of people here whose families fought for what has become the 5hit hole dumping ground of the world. Let me see, how many of those who fought for Britian have been dumped to one side by Britian after they've exceeded their usefullness - you know, like the Soldiers on the streets at the moment. Served with honor and distinction defending our country and our way of life meanwhile we're pandering to foreigners, putting them up in hotels while real heros lay on the streets at night”

See how easy it is to start seeing people as “other” to us and trumpeting how they should be treated differently to us? 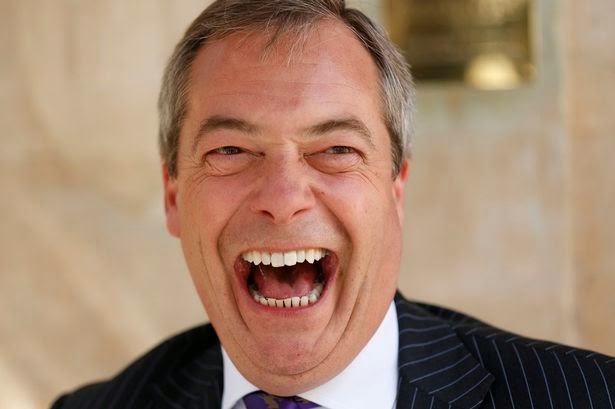 At the risk of invoking Godwin’s law, isn’t this how it starts? By the time the onlookers have gathered, the victim has been made to kneel and the soldier is pointing his gun, it is far too late to ask how you got here.
Posted by swisslet at 19:32