Back at the beginning of August, I wrote a letter to my MP. It's not the first time that I've written to Kenneth Clarke: I wrote to him about the Iraq war, and he sent me a splendid, three-page typewritten reply.  This time around, I was moved to write to him by the shocking killings in Palestine.

It took him a fair while to write back.  In fact, I was only thinking this morning that I was a bit disappointed not to hear back from him.  It's his last term in Parliament, having been the MP here since 1970.  Forty-four years service.  Still, he's 74 years old now, so I suppose the poor old boy is due a bit of a rest after a pretty stellar career (although no doubt not quite as stellar as he might have at one point hoped).  I'm not a Conservative voter by any stretch of the imagination, but if you had to pick a Conservative to represent you in Parliament, then I would suggest that you could do an awful lot worse than Ken Clarke.

I should never have doubted him. 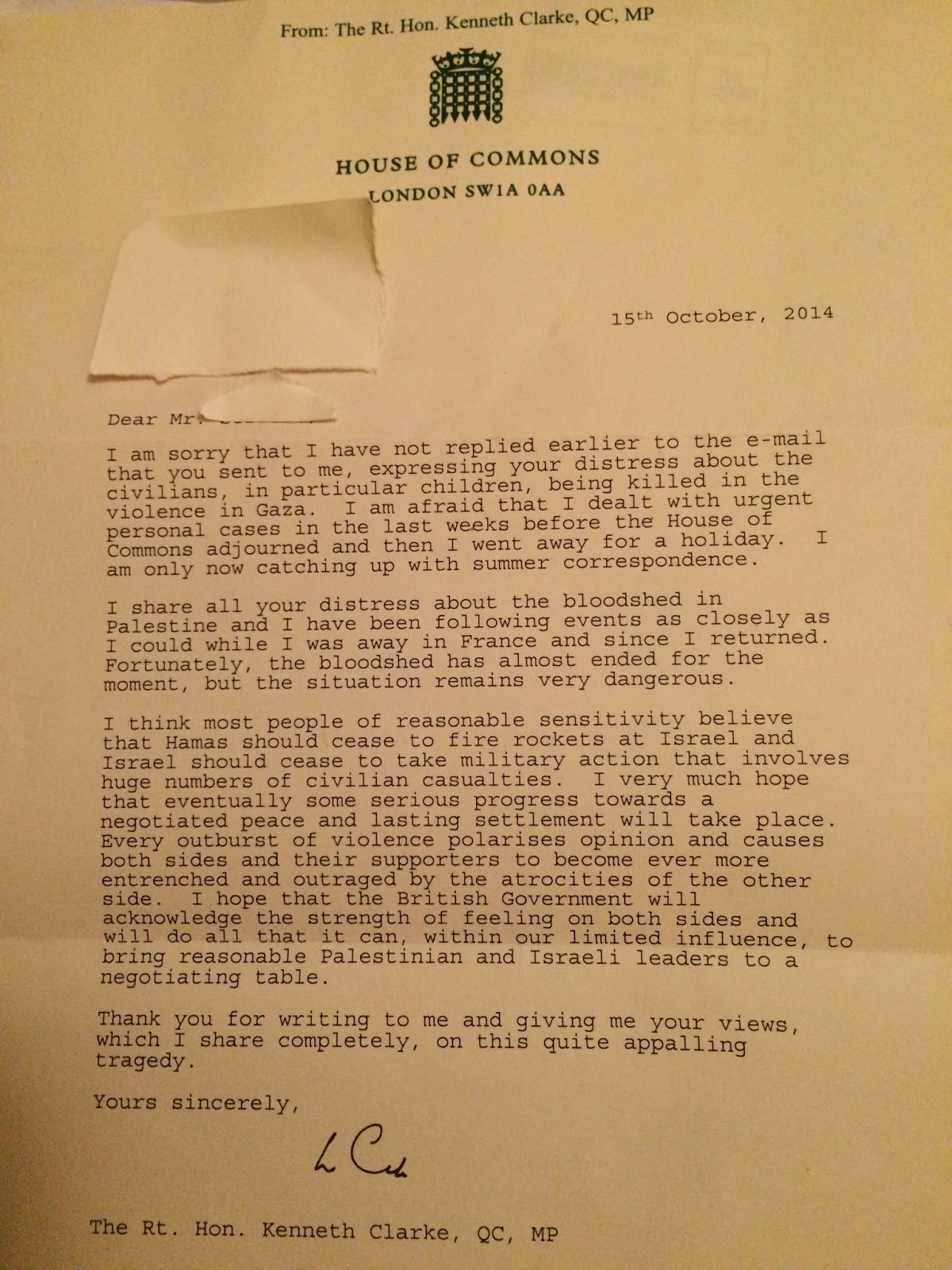 In case you can't make that out, here's what he says:

"I am sorry that I have not replied earlier to the email that you sent to me, expressing your distress about the civilians, in particular children, being killed in the violence in Gaza.  I am afraid that I dealt with urgent personal cases in the last few weeks before the House of Commons adjourned and then I went away for a holiday.  I am only now catching up with summer correspondance.

I share all your distress about the bloodshed in Palestine and I have been following events as closely as I could while I was away in France and since I returned. Fortunately, the bloodshed has almost ended for the moment, but the situation remains very dangerous.

I think most people of reasonable sensitivity believe that Hamas should cease to fire rockets at Israel and Israel should cease to take military action that involves huge numbers of civilian casualties.  I very much hope that eventually some serious progress towards a negotiated peace and lasting settlement will take place.  Every outburst of violence polarises opinion and causes both sides and their supporters to become ever more entrenched and outraged by the atrocities of the other side.  I hope that the British Government will acknowledge the strength of feeling on both sides and will do all that it can, within our limited influence, to bring reasonable Palestinian and Israeli leaders to a negotiating table.

Thank you for writing to me and giving me your views, which I share completely, on this quite appalling tragedy.

Maybe that's a boilerplate reply, at least in part, but you have to admire the man's style.

I rather fear that this constituency will be a UKIP target at the next election, without a well-established and well-loved MP in place to fight them off.  It's usually Ken first, and everyone else a long way back, with the Lib Dems the nearest.  Well, no one's voting for them next time around, and this constituency voted for UKIP at the European elections, so it's very possible we might be seeing a lot more of Nigel Farage (in spite of his Nottingham egging).  It's all too depressing for words.  I might have to get off my arse and help mobilise people to the polling stations.  If people are disillusioned and don't vote, they might as well be casting a vote for the idiots because they will surely benefit. As Edmund Burke wrote, 'All that is necessary for the triumph of evil is that good men do nothing.'