Two rather contrasting running experiences over the last few days.

On Saturday, at Colwick ParkRun, I was lucky enough to be be able to guide a blind runner around the course. 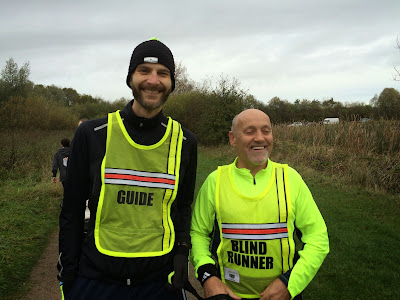 Terry is a great guy and - before his lost his sight - ran something like 30 marathons and was a sub-90 minute half marathoner.  He took 16 years off running but has been getting back into it over the last couple of years.  He knows Colwick Park pretty well, and my main job was to make sure that he knew what was happening around him and when the underfoot conditions were changing.  Watching him in action at such close quarters was really pretty humbling.  We ran around in a little over 29 minutes, but Terry is just coming back from injury and would usually be looking to run the 5km in about 25 minutes.  Next year, he told me, he wants to run 22-something.  To put that into context, my best around this course is 22:48.... and I'm fully sighted.  Can you imagine running at any sort of pace with a blindfold on?  I can't.  Nevermind running at those sorts of speeds.  It's humbling.  We had a good old natter on the way round too.  He's a remarkable man and I look forward to guiding him some more in the New Year (he's off on a cruise in a week or two to renew his vows with his wife.  I understand she was very keen that I deliver him back in one piece and would rather that he didn't run at all.... well, I held up my end of the bargain).

The other running experience was quite different: 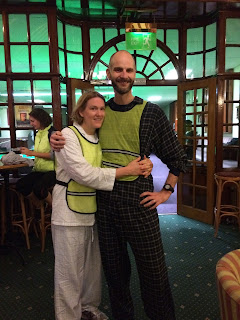 My running club had a pyjama night on Monday to raise money for Children in Need.  As I haven't actually owned a pair of pyjamas in more than twenty years, I actually had to pop out to Asda on Sunday afternoon to buy myself a pair.  Still, we raised £200 for a good cause, so that's probably okay.

As we ran round the streets in our nightwear, I was surprised by two things:

1) Very few people pay you any attention at all, even when you are out running in your pyjamas and surrounded by other people wearing onesies and things.

2) Pyjamas are surprisingly comfortable to run in.

Those two things being true, perhaps I should repeat the exercise another time?  Perhaps running in pyjamas could become a thing.  Running in them certainly beats sleeping in them, anyway.
Posted by swisslet at 19:49