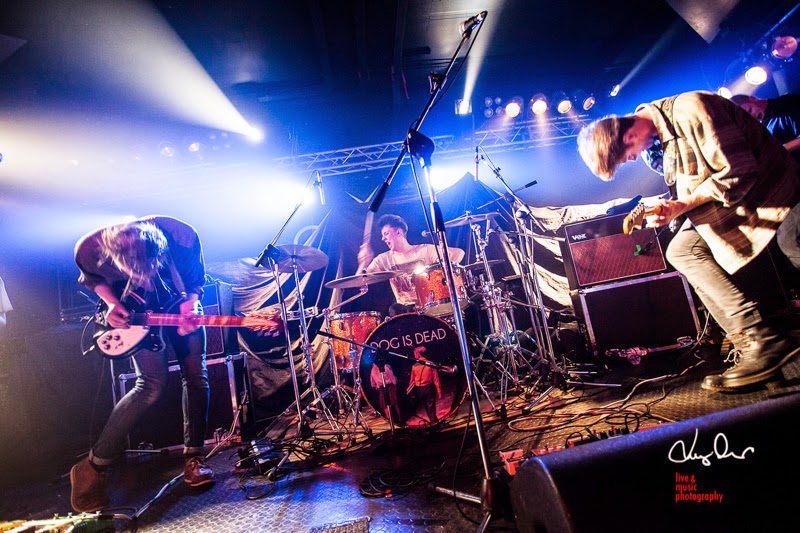 The artists formerly known as Dog is Dead returned to their old stamping ground for one of their now-traditional Christmas gigs.  They've been "the next big thing" on Nottingham's music scene for a few years now, and with their debut album reaching number 45 in the UK charts in 2002 and Clifton's Jake Bugg leaving them gasping in his wake, this is a band that have everything to prove with their forthcoming second album.  Make or break time, boys.

As the band said themselves when they booked the gig:

“Recording the first album was a learning curve of which we worked with 4 different producers from completely different backgrounds, from psych-maniac David Kosten to 80s legend Trevor Horn. Sometimes it takes a long time to learn where the best place for you to write and record is, both metaphorically and literally. We knew this time around we wanted a finished product before we went and toured the world over rather than going back and forth to the studio. What we took from the first record is that we knew we wanted to starve ourselves of luxury and write and record in Nottingham at our favourite studio (random recordings) in the middle of an industrial estate. No luxury 12 foot mixing desks and symphony orchestras lying about meant that we could focus on the pure essence of song and stay true to the progression of the band with no eye on being 'current'. This process meant we had to have the discipline to sacrifice playing live shows until now which has only made us more hungry to get on the road and cause trouble."

The kids love them, anyway.  They've been featured on "Skins" and a sold-out crowd at the Bodega is both extremely youthful and very, very excited.  They say that we've reached "peak beard", well perhaps that's true, but without a word of exaggeration, every single man in the room who is able to grow a beard (with the notable exception of LB) has grown a beard.  Or at least attempted to grow a beard.  You really have to admire some of the wishful thinking on display here.  Long bumfluff is still basically  just bumfluff, right? No matter how much you want it to be a proper beard.  Bless....

I've never seen Dog is Dead before.  Perhaps that's a remarkable thing for someone who reviews Nottingham music to say, but there it is.  I'm barely familiar with any of their work and can thus approach this gig with a fresh perspective.  Well, with that fresh perspective, let me first tell you that the guitarist looks a little like Westley from the Princess Bride with a top-knot and a big ginger beard.  My first (proper) observation is that they sound a lot more substantial live than they do on record.  Their debut album is good enough, and grows on me with every play, but they're a little bit vanilla for my taste.  The singer's voice lacks subtlety and nuance (or he is not being very adventurous on record), with the end result that every song sounds more or less the same.  It's all very pleasant, and one or two of the songs really soar, but they stubbornly refuse to take flight for me.

Live, they're a different proposition; they're much more muscular and, when the fancy takes them, they really get their rock on.  They certainly make the whole Bodega shake when they get the youth jumping up and down (although, to be honest, when I see a crowd getting that excited when an otherwise fairly mild band starts to rock out, I can't help but think that they really need to go and watch Metallica or someone with proper riffs, but that's probably just me.....)  The old songs sound better than on record and are joyously received by the bearded, exuberant youth of Nottingham; new songs like "Killer Whale" and "Hotel" sound pretty damn good too.

They're a good band, and it's a good night.  Besides, how could I not get behind a bunch of lads who hail from leafy and genteel West Bridgford?  It's not the natural habitat of a rock band, is it? This is a big few months for them and with a following wind and these songs, their second album could really see them go all the way.  Fingers crossed.

LB reviewed this gig for the Evening Post (and was good enough to get me in as his 'plus one').  His vastly more informed review of the band he first interviewed in 2012 can be found here.
Posted by swisslet at 21:22