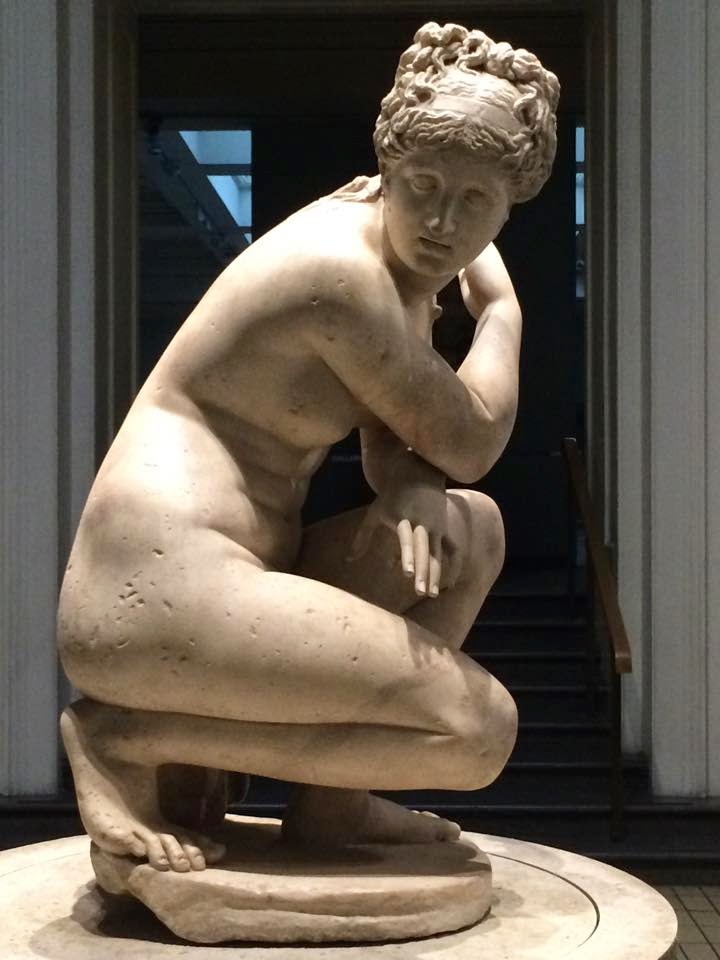 
If you live in Nottingham, 6pm on a Tuesday evening in Central London probably doesn't seem like the most convenient time or place for a meeting.  Well, to be honest it isn't.... but I was quite keen to attend the get-together organised by the MS Trust for the runners who will be raising money for them in the London Marathon, and I've got holiday I need to use, so I just took the day off.  Besides, C. gave me a membership to the British Museum for Christmas, and this gave me a good opportunity to start to use it.

I love the British Museum.  It's one of those splendidly Victorian institutions where admission is free and where we store many of the priceless treasures that we have stolen from all over the world.  Often it's stuff that we had no right to take in the first place, and in many cases things that we have no real justification for keeping now.... the Elgin Marbles of course being a case in point.  They're splendid, but really what on earth are they still doing in London? (especially if we're going to pack bits of them off to St Petersburg on loan).

Last time I was here, I rented an audio guide and spent some time learning about the Marbles and then following a tour of some of the museum's classical highlights.  That worked pretty well, so this time around, I rented another audio guide (10% members discount) and looked at some of the museum's Ancient Egyptian collection.  The mummies here are consistently amongst the museum's most popular exhibits, and even on a Tuesday afternoon in January, some of the galleries were positively heaving with visitors.  Ah well. It's good that it's being used, right? 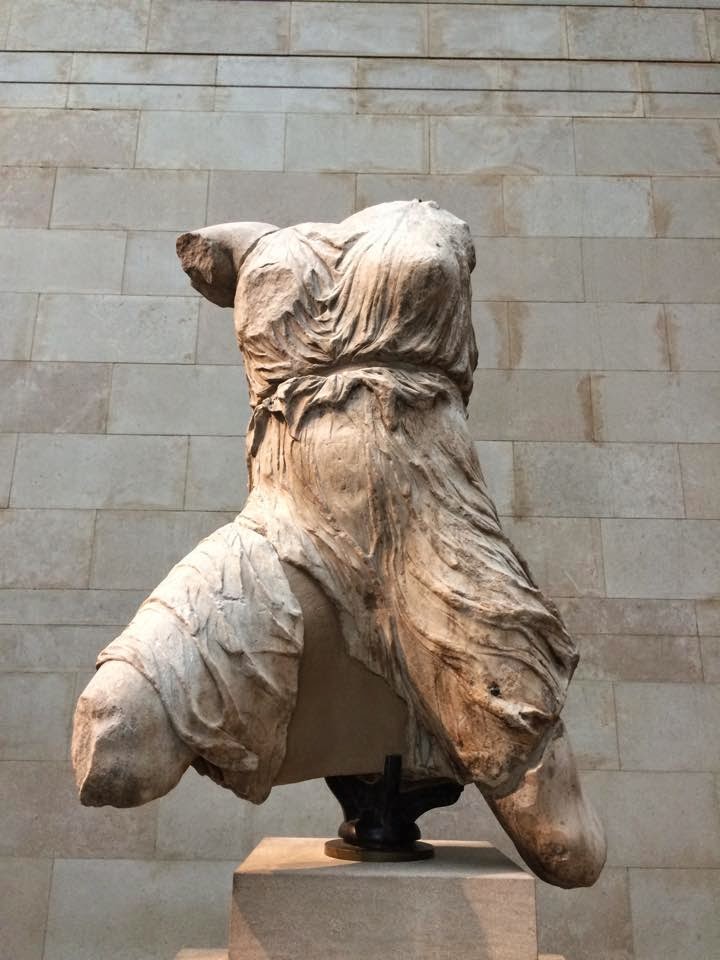 Iris from the Parthenon Sculptures


Actually, the mummies make me feel a bit uneasy.  In the main, they've been treated with respect here and allowed to remain wrapped up in their linen and in their sarcophagi, but there's something very unsettling to see these human remains in this setting.  Another benefit of my membership is that it gets me into any of the exhibitions for free, and I spent a fascinating hour at "Ancient Lives", a closer look at eight of the museum's mummies.  They've used modern scanning techniques to really get inside the wrappings and to examine the bodies, and the insights are startling.  There was a lot of dental decay in Ancient Egypt, it seems, with many of the bodies showing evidence of decay and abscesses that would have caused a great deal of pain and perhaps also death.

Just look at this one (from a less enlightened time when they clearly *did* unwrap the mummies). 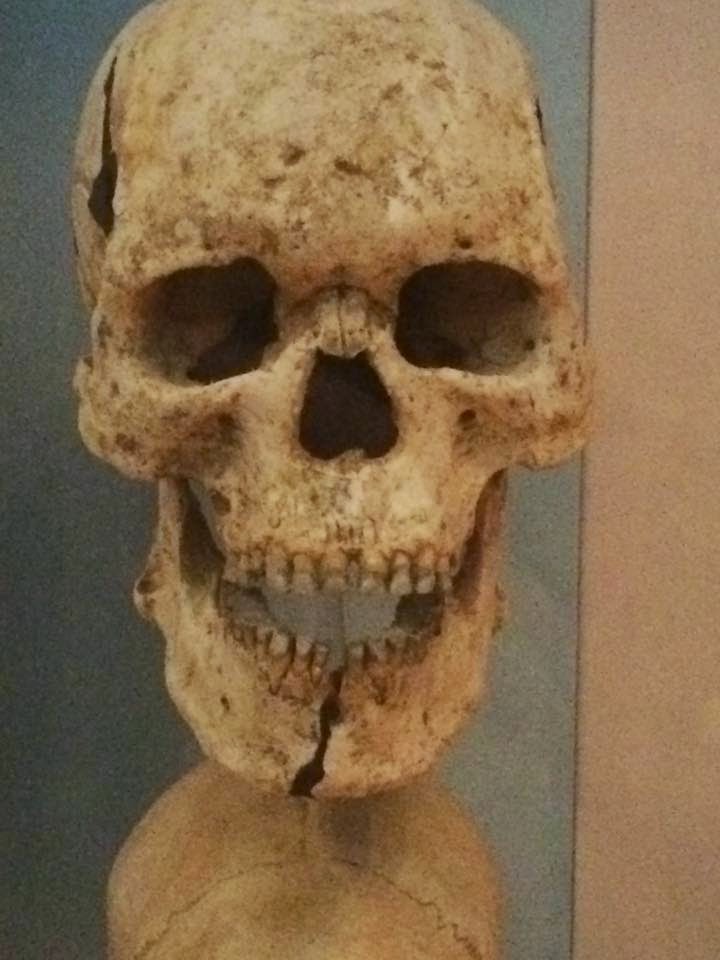 That hole in the lower jaw is an abscess that occurred during life and caused that damage to the bone. Ouch. I imagine that stung.

My favourites here - at least from what I've discovered so far - are the classical sculptures.  Just look at Lely's Venus (2nd century AD) and Iris from the Parthenon Sculptures (around 438 BC): aren't they beautiful?  I've studied the Renaissance as part of my degree, and although I've seen some remarkable sculptures from that time (Michelangelo's Pieta or Moses, spring to mind)... I've not seen anything that can surpass some of these sculptures from thousands of years earlier.  Iris would originally have had brass wings, and just look at the way that the fabric of her translucent tunic ripples against her thigh.  How can you get such a subtle effect from solid stone? Have you ever seen anything as beautiful?

I learned loads from the physios, former runners and nutritionists at the MS Trust get together that evening, but my day at the British Museum was a lovely way to spend a random midweek day in a dark and cold January.

I've just finished reading - on Monday night -  The Adventures of Luther Awkwright, the seminal comic strip by Bryan Talbot.  So I was mildly surprised and pleased to see a chap wearing an Octobriana t-shirt at the British Museum. 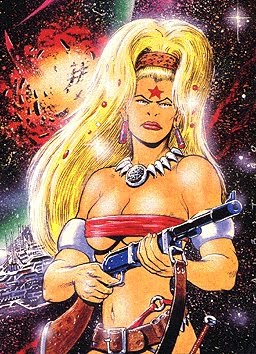 In the Members' Room, of all places!  Good heavens!
Posted by swisslet at 23:03

Email ThisBlogThis!Share to TwitterShare to FacebookShare to Pinterest
Labels: culture etc., history and stuff, trust me I'm an historian