One of my old running buddies asked me today if I had an opinion on the existence of women only races. This is “Race for Life” season, and the Embankment on the river Trent was covered with wave after wave of ladies dressed in pink last weekend, running 5km to raise money and awareness for cancer research. Alongside their running numbers, many wear hand-written signs detailing who they are running for; some with pictures; many no longer with us.

It’s quite an emotional event, and it always seems like a glorious celebration to me. I have a friend who runs it every year, she trains for a few weeks before the event and worries about whether she’s going to be able to make it and then proudly takes selfies, all red-faced at the finish. She tries to shrug it off and tells me that she’s not a real runner, but I always tell her that she’s just the same as me: runners run. If you run, you are a runner. It’s that simple.  Don't let anyone try and tell you that it isn't.

Does it bother me that I’m excluded from races like this? Not really. You know the kind of person who complains on International Women’s Day that there isn’t an International Men’s Day? Why would I want to be that guy? Why would anyone want to be that guy?   If it bothers you that much, please feel free to set up your own, male only event.  Besides, the other 364 days of the year and most of the human existence has been one long international men's day, hasn't it? Really?

So no, I’m not threatened by a women only race or opposed to the idea of it. Why would I be?  Some of the strongest people I know happen to be women (some of the quickest runners too, for what that's worth).  Sheesh.  Haven't people got more important things to be worrying about?

As it happens, my nephew and niece have just taken part in the schools version of race for life (which is open to both boys and girls).  My 8 year old niece managed a full 5km and her little brother something less than that.  My dad sent me pictures of the cards they pinned to their t-shirts.  To say he was touched is something of an understatement: 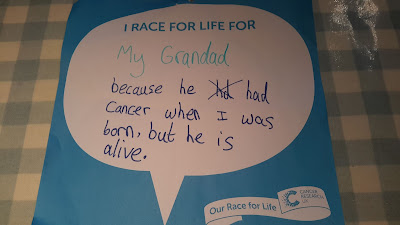 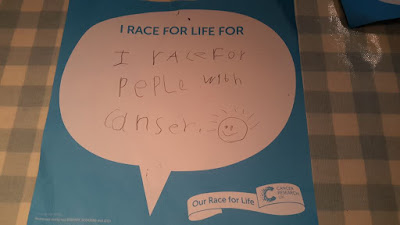 If you're interested, here's the Cancer Research position on why Race for Life remains a women only event:

"When we launched Race for Life in 1994 it was unique due to the fact that it was a women only event and this aspect has really shaped how the series has grown from strength to strength each year. The atmosphere on the day of Race for Life events has a strong sense of sisterhood, uniting all women with a common goal, to raise funds to beat cancer. We regularly review our events to make them the best they can be and four years ago we seriously looked at whether we should let men enter Race for Life. However, our research showed that Race for Life’s success is due to its appeal to women as a women-only event and to allow men to enter could bring in less income for the charity’s life saving work. We cannot risk this vital source of income to cancer research. We hope you understand that this decision has been made in the best interests of the cause."

A women only race? Human sacrifice, dogs and cats living together... mass hysteria!
Posted by swisslet at 20:21