Some of the younger members of my team had a board game night yesterday. They came into the office clutching bags filled with games like “Settlers of Catan”, “Dead of Winter” and “Would I Lie to You?” ready for the evening ahead of them (doesn’t anybody play “The Game of Life” anymore?).

Inevitably, they ended up playing “Cards Against Humanity”

They came back into the office this morning telling stories of their night. Amongst the guests were a bunch of guys who are on the graduate training scheme. It seems that Cards Against Humanity is a bit of a struggle for your average 23 year-old graduate: apparently one of the other players had absolutely no idea what “Auschwitz” might be, didn’t know what “dysentery” was (or how to pronounce it) and was also stumped by the word “solace” 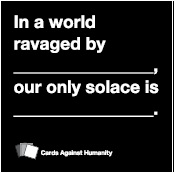 Now, I know that this game isn’t everybody’s cup of tea, and you need to be a little careful who you play with in case anyone is easily offended (although, in my experience, the person you think would like the game the least is often the one who runs away with it)…. But you’d expect most reasonably intelligent people to at least be able to understand all of the words, wouldn’t you?

How is it possible to come all the way through our higher education system without even a passing knowledge of the most infamous concentration camp of them all? Isn’t that exactly the kind of stuff we should be teaching our children? Aren't we supposed to be never forgetting that sort of thing? What exactly are we teaching them? Don’t they have any intellectual curiosity, damnit?

This, remember, is the carefully selected talent that will one day be running the business and perhaps the world.

Children are the future, my arse.
Posted by swisslet at 20:40