play among the stars.... 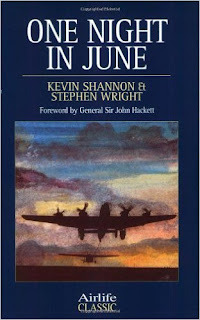 I spent a good part of my Sunday afternoon reading "One Night in June" by Kevin Shannon and Stephen Wright.  It was loaned to me a little while ago by mother-in-law before a trip to Normandy that we unfortunately had to cancel.  The book tells the story of the British Glider Regiment and their role in Operation Tonga.

"Operation Tonga was the codename given to the airborne operation undertaken by the British 6th Airborne Division between 5 June and 7 June 1944 as a part of Operation Overlord and the D-Day landings during the Second World War. The paratroopers and glider-borne airborne troops of the division landed on the eastern flank of the invasion area, near to the city of Caen, tasked with a number of objectives. The division was to capture two strategically important bridges over the Caen Canal and Orne River which were to be used by Allied ground forces to advance once the seaborne landings had taken place, destroy several other bridges to deny their use to the Germans and secure several important villages. The division was also assigned the task of assaulting and destroying the Merville Gun Battery, an artillery battery that Allied intelligence believed housed a number of heavy artillery pieces, which could bombard Sword Beach and possibly inflict heavy casualties on the Allied troops landing on it. Having achieved these objectives, the division was then to create and secure a bridgehead focused around the captured bridges until they linked up with advancing Allied ground forces."

In spite of poor weather, communication difficulties and some poor navigation, the Operation successfully completed all of its objectives and significantly hindered the German response in the crucial early hours of the D-Day landings. Of course, that summary obscures the extraordinary heroism and sacrifices of the troops involved. Apart from anything else, the gliders used in the operation were made of very lightweight wood, were laden with the heavy equipment needed by the paratroopers - light artillery, jeeps, bulldozers and the like - and were helplessly towed into enemy territory through flak and by planes that they couldn't always reliably communicate with. As if that wasn't bad enough, their target landing zones were tiny, hard to locate and often protected by telegraph poles that had been specifically put in place to prevent exactly this kind of attack. Many of the gliders and supporting paras landed as far as two miles away from their objectives, so the completion of all of their primary and secondary objectives becomes an even more remarkable achievement.

The book has the first-hand accounts of many of the pilots involved in the operation and all have extraordinary stories to tell, many told with the kind of understatement and stiff-upper lip that you imagined only existed in the most hackneyed war films.

What gives this story all the more poignancy and relevance for me - albeit indirectly - is the fact that one of the pilots involved in the operation - was my wife's grandfather. He flew glider 100 and was fatally wounded by enemy fire during the landing. His story is told by his lead pilot, and his memory and sacrifice are thus commemorated and remembered.

Of course, in the wider context of the war, this was just one small piece of a much larger story, and just one lost life amongst thousands lost on that day alone... but it was a crucial piece of that story nonetheless and it deserves to be remembered and re-told, and not just by his family.
Posted by swisslet at 21:20

Email ThisBlogThis!Share to TwitterShare to FacebookShare to Pinterest
Labels: family, history and stuff, more important than that