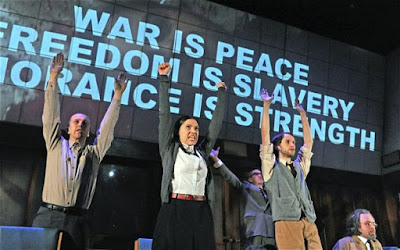 I’m slightly embarrassed to admit this, but I’ve never read “1984”. I haven’t even seen the film adaptation – made in 1984, naturally – starring John Hurt. Because the book has been so influential and because references to it litter our every day lives, I had a bluffer’s knowledge of the plot and themes, but I was quite excited to really see first-hand an adaptation of such a famous piece of literature. The book was written in 1948, but many of the themes seem to be more relevant than ever before, but by the end of the play, I wasn’t sure whether that was because Orwell was particularly prescient or because so many of the themes of the book have simply been absorbed into our language and into our cultural reference points. I’m not sure that a cheap reality TV show starring a parade of vacuous show-offs was quite what Orwell had in mind, but Big Brother has been on our screens now since 2000, and the phrase “Big Brother is watching you” was well understood long before that. Most people will be familiar too with the concept of “Room 101”, albeit perhaps thinking it’s somewhere that minor celebrities send things that mildly irritate them for our entertainment, rather than somewhere a cage of ravenous rats might be strapped onto your face. We live in a CCTV culture and we read stories of how our emails and mobile conversations are eavesdropped; spin doctors have been selling us “newspeak” for years; hell, even the Architect in the Matrix films seems to be echoing concepts from the book. It works the other way around too: when Orwell writes in 1948,
“Sanity is not statistical – being in a minority, even a minority of one, did not make you mad” is he, consciously or unconsciously, echoing Gandhi’s (d. 1948) famous “Even if you are a minority of one, the truth is still the truth”.

Much of the play just seems so familiar. 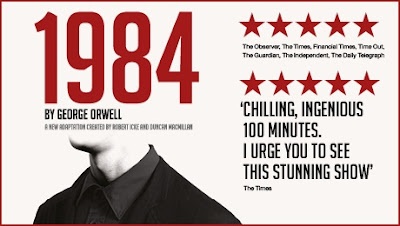 So did I enjoy this production, one that’s been very well reviewed and is about to go on a world tour after a successful run in the West End? Hmm. Sort of. At the beginning, there was an awful lot of repetition. You know that thing that Stewart Lee does where he repeats the same joke over and over again, to the point where it stops being funny and beyond… hopefully to the point where it starts being funny again? I hate it when he does that. To me, it’s just repetition and it doesn’t make the joke any funnier as he repeats it and deconstructs it and reassembles it. It is possible to be too clever for your own good. This play reminded me of that, and it took me a good half hour before I started to settle into the plot and to actually begin to find it interesting rather than just annoying (at one point I thought I couldn't be bothered and contemplated walking out). The acting is mostly good; not very subtle perhaps, but decent (and is the stage, darling). The staging was fairly simple, but they made some nice use of off-stage locations and handheld cameras to show us what was going on, albeit it in a slightly over-stylised way, perhaps.  Oh look!  Winston and Julia think they are safe from being observed, but we're observing them on the screen, so that kind of makes us Big Brother, yeah?  Some of it was also visceral and shocking, which I imagine it is entirely meant to be - and hats off to Matthew Spencer as Winston and Tim Dutton as O'Brien in those scenes, as well as to Janine Harouni as Julia.

I’m pleased that I went, but I wouldn’t say that I especially enjoyed my time. Watching the play did, however, make me more determined to actually read the book for myself (and, to be fair, some of my criticisms of the play might derive from the original)…. So I suppose from that point of view, it’s been a success.  A partial one, at least.

1984 does sound like something that was directed by John Hughes and starring Andrew McCarthy and Molly Ringwald though. It really does. I imagine that would be a different kind of beast entirely.
Probably with a much better soundtrack.
Posted by swisslet at 22:10