I had my hair cut at the weekend.

This is not a remarkable or unusual occurrence. It happens every three or four weeks. I like to keep my hair short, and this means pretty regular trips to the barber. I do own a pair of clippers, but the only time I ever tried to do it myself, I made a mess of it and haven't really be inclined to do it again since. C. used to do it for me, but although it saved me £8 a time, the cost was high in other ways (mostly that my hair is incredibly spiky and gets bloody everywhere when cut) .... and anyway, I don't mind a little natter with the barber once in a while.

Normally, I go on my own. But this week, C finished her coffee in town early and was waiting for me whilst I was still in the chair. An old colleague of mine was there too, and as we went to his wedding, my wife was happily making conversation with him as the final touches were put to my new 'do'.

When I joined them, C. cast a glance across my head and made some remark about how I now seemed to have a secondary bald patch developing, and that the two would surely meet before too much longer. 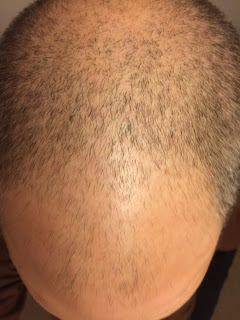 She's right, of course.  There's not much point denying it.  I haven't had a fringe since about 1994.

The thing is though, I just don't care.  I realise that running a weblog with lots of pictures of myself might lead you to think otherwise, but I don't think I'm an especially vain man, and hairloss doesn't really bother me at all.  I actually started having my hair clippered before I realised that I was going bald (which wasn't until I was about 22 anyway), and it's been getting shorter and shorter ever since.  It's only this long now because of the beard.  When I'm clean-shaven and my hair is properly short, my wife likes to call my overall appearance my "chemotherapy look"... no hair and sunken cheeks.  Charming again, no?  She's a keeper for sure.

Thinking about it, it's remarkable that only two people in the last couple of years since I've had the beard have amusingly suggested that my head is on upside-down.  But as the bumper slogan on a Wicked Camper we saw in Australia put it, hair is a waste of testosterone anyway.  Have you seen what young people do with their hair?
Posted by swisslet at 22:06