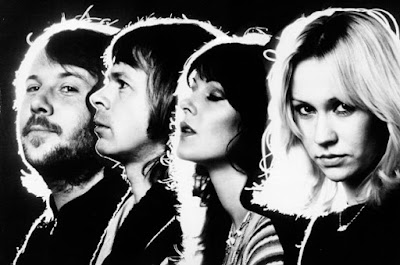 For many years, Abba left me utterly cold.  I can actually remember the very tail end of their career, and songs like "Super Trouper", "Gimme! Gimme! Gimme (a man after midnight)" and "Voulez-Vous".  There wasn't much music in the home when I was growing up, but somehow Abba found a way in.   I think the damage was done by "Dancing Queen" when I was a student.  Not the song itself, so much, as the ridiculous hysterical reaction it got whenever it was played.  I particularly hated the guys who, as with "I Will Survive", seemed to think that knowing the words to this song and enthusiastically joining in when it was played would help them attract women.

Maybe it worked.  What I do know for certain is that standing on the sidelines scowling *definitely* didn't work.....

It wasn't really Abba's fault, but I've sort of hated the band ever since.  "Muriel's Wedding" was alright because it was about a lot more than just the music, but I certainly wasn't about to go out of my way to watch "Mama Mia" (although, to be fair, that's about it being an obviously awful film rather than particularly about the music.  I'm sure plenty of Abba fans dodged that bullet too).

Initially, lost in a world of heavy metal and then The Smiths, this dislike wasn't really much of a problem... but as my appreciation of music began to broaden and to deepen, I became aware that Abba weren't just another crappy pop band, and that they were actually some of the finest exponents of the art of the pop song.  Perhaps it was even true that their songs often had depths beyond the melody.

I knew this, but still couldn't bring myself to open my ears to them.

Well, I'm older now, and I'm better able to put ridiculous preconceptions and prejudices behind me.  I'd been toying with the idea for a while, but finally went ahead and bought "Gold".

It's brilliant, of course it is.

I've been listening to Iron Maiden all week, but today I cycled to work listening to Abba.  It was a miserable, damp morning.... but you know what?  I felt FABULOUS, and I don't care who knows it.

More proof, if any more were needed, that young me was an idiot.
Posted by swisslet at 21:21