Let's conspire to ignite all the souls that would die just to feel alive... 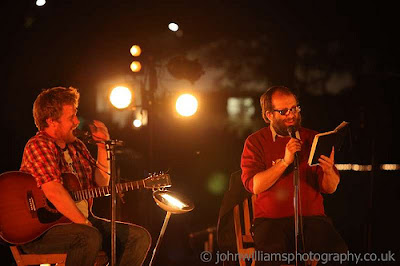 Photo by John Williams from Latitude 2010

Under normal circumstances, a show consisting of three one-hour acts that finishes well after 11pm would definitely be stretching it a bit for a Sunday night. But Kitson isn’t like other performers, and I’ve learned that, when he comes to town, it’s well worth investing a bit of your time to watch a master at work. He’s one of those comedians that’s very difficult to explain to people. You might remember him as the barman from Phoenix Nights with the milkbottle glasses, but he’s not like that at all. Not even close. So, how to describe this show? Well, here’s how the man himself describes it:

“In 2009 (Seriously, isn’t the passage of time horrifying?) we wrote a trilogy of story (Me) and song (Gavin) ultra combo mega shows called Stories for the Starlit Sky and comprising three interlinked stories about love (obviously), staying up all night (naturally) and a village populated by retired assassins (yeah, that makes sense). We performed them in Regents Park Open Air Theatre on three separate summer nights, one in June, one in July, one in August and all of them at midnight. There were indeed stars in the sky. Some people brought flasks. A couple of years later, we whacked them out over consecutive nights at the Latitude festival from the middle of a lake in a slightly futile battle against the ambient bass of various DJ sets and whooping intoxicated infants. Most recently in July of this year (2015, obviously guys) Regents Park Open Air Theatre had a spare night after a late drop out – I rewrote the stories a bit (one of them really quite a lot) Gavin practiced his songs and we performed all three of the shows in one night. One after the other.”

So, Kitson sits on a chair with a notebook, reading out a story. Gavin sits next to him, providing gentle backing music on a guitar, banjo or ukulele. Occasionally, Kitson will stop and Gavin will perform a full song, loosely connected to the story. There are occasional asides, but basically that’s it: a guy reading a story out from a notebook with a bit of music. Of course, that does the show no kind of justice at all. For starters, Daniel Kitson has a lovely feel for language. His stand-up sometimes seems like a stream-of-consciousness ramble with many disparate threads, but as he ties all those threads together at the end of the show, you realise that he has planned the whole thing meticulously. Every phrase, no matter how casually delivered, has clearly been carefully weighed and considered before being used. Not a word is wasted.  As someone who delights in language myself, it’s a delight to listen to him weaving this tapestry of words.

These stories are off-beat flights of fantasy and yet they are also carefully rooted in the real; they seem almost childlike, but they deal with real feelings and emotions. The three stories are different, but they are connected, and there is a narrative thread that runs throughout. Osborn’s music adds another dimension, and his very presence on the stage seems to relax the sometimes-very-intense Kitson and gives the stories room to breath and to come to life. I was spellbound throughout (even when my leg began to spasm and I began to wish that the show had begun a little earlier…. The crowd was noticeably thinner after the second interval, which is more a reflection of the fact that it was nearly half past ten on a Sunday night than it was a comment on the quality of the show... although, for my money, the last act - longer than the others - could have been a good ten minutes shorter.  Maybe, if it had all started earlier, I wouldn't have cared all that much.  But I'm human and I was tired).

This is a difficult show to categorise: it’s not stand-up, it’s not musical performance and it’s not gut-wrenchingly funny. It’s art, I think: it is beautiful, funny, uplifting and heart-breaking. There are surely not many artists who could make something like this work, but Kitson is a genius and he most definitely can.

Well worth three hours of my time on a Sunday night, and well worth seeking out, if you get the chance.
Posted by swisslet at 22:08