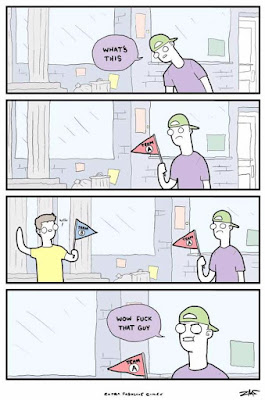 I like sport and I've been lucky enough to be at some incredible sporting moments.  Off the top of my head: the GB coxless four winning gold by a whisker at the Athens olympics in 2004; Kelly Holmes winning gold at the same Olympics; England winning the Trent Bridge test against the Australians in 2005 on their way to winning the Ashes for the first time in a generation (and pretty much every other test match at Trent Bridge in the last fifteen years or so, including Stuart Broad's remarkable 7/15 this year); Europe just pipping the USA to the Ryder Cup at the Belfry in 2002 and then thrashing the same opposition at the K-Club in 2006; the London Olympics in 2012 but especially the humbling and inspiring Paralympic Games that followed; I've seen Real Madrid play at the Bernabeu and I've watched Milan play at the San Siro; England v Wales at Twickenham in the 2015 Rugby World Cup.... well, you can't win them all.

When you think about it though, it's all a bit weird, isn't it?  Wasting all that time and energy in the pursuit of something that is inherently pointless?  Watching it is surely even more pointless than taking part.  Camus doesn't strike me as an especially humorous man, but surely he was joking when he claimed that,  “After many years during which I saw many things, what I know most surely about morality and the duty of man I owe to sport.”  That's definitely overthinking it.

Orwell was probably closer when he suggested that it was "war minus the shooting".  Although, I think he maybe came up with that when he was sitting amongst some football fans (isn't it funny how rugby fans can be trusted to sit amongst their rivals and to drink beer in their seats, but football fans are definitely not?)

Sport is stupid.  No question.

And yet... and yet.... is there anything else that stirs the emotions in quite the same way? Does the fan not live and die and be reborn again with the rise and fall of his team? I'd even go as far as to suggest that it's the falls that make the rises all the sweeter.  Where's the joy in supporting a team that always wins?  Tell me that, All Blacks fans.

Well, anyway.  Sport is certainly ridiculous, but it's definitely fun.