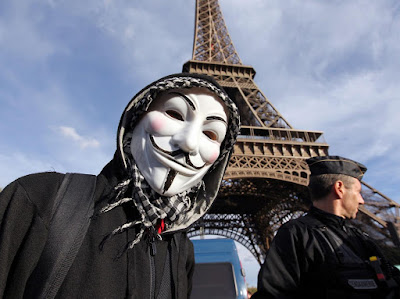 In the aftermath of the Paris attacks, perhaps one of the stranger things to happen was when the hacker collective, Anonymous, declared that it was "at war" with ISIS.

“You, the vermin who kill innocent victims, we will hunt you down like we did those who carried out the attacks on Charlie Hebdo"

It seems that they have begun by releasing the details of 900 Twitter accounts they say belong to ISIS and have now all been suspended.  Apparently, they're also leaking the personal information of suspected ISIS members online.

On my Facebook feed at least, this news seems to have been met with glee.  Good.  Hit these bastards wherever you can land a punch.

The thing is though, is this something we should be celebrating?  Are we happy to take the word of an anonymous group of hackers on who is, or is not, a member of ISIS; on who deserves to be exposed and to have their social media presence shut down, with perhaps worse to come?

The plain fact of the matter is that Anonymous can't be held accountable for their actions and that makes them dangerous and we should be careful before clapping them on the back and celebrating them as heroes.

When it comes down to it, this approach is scarcely more forensic at tackling the problem than bombings... although at least David Cameron can't start his bombing campaign without the assent of Parliament.  Anonymous have no such scrutiny.  Let's hope that, this time around, Parliament gives a little more thought to the end-game than they have done in the past.  Will bombing Syria stop our own citizens taking up arms against our society? Lop one head of this hyrda, and two more grow back in their place and you had better be ready when they both come back at you harder and faster than before.

Without a clear idea of what we're trying to achieve, we shouldn't drop a single damn bomb anywhere.  If we kill innocent civilians in the heat of anger with our bombs, how does that make us different to the Paris gunmen?

This isn't a simple issue and there aren't any simple answers.  Let's not cheer the creation of any more chaos and the propagation of any more hatred.  There's already plenty enough of both.
Posted by swisslet at 17:32