I'm not going to go on about this for very long - I'm sure you've read and heard enough about David Bowie from everyone else by now - but I did want to say this:

I didn't grow up in a house with much music.  I acquired a few cassettes here and there from the age of eight or nine, but it wasn't really until I was thirteen or fourteen that I really began to explore my own tastes.

Given the lack of interest in the family home, I'm not really sure where the initial curiosity came from, but there was something that sparked an interest in me to find out about music.  There was the disastrous time that I came back from WHSmiths, proudly clutching a cassette copy of "Legend" by Bob Marley, somehow under the impression that I'd picked up an album by Bob Dylan.  OK, so clearly my basic knowledge needed some work, but I like to think that this at least showed a basic curiosity to investigate some of the key artists.

At some point in the early 1990s, by now well and truly lost in a world of often very dubious heavy metal, I joined the Britannia Music Club.  It seems ridiculous now in the age of instant downloads and YouTube, but this was one of those mail order things where you got five free albums if you signed up, and they would send you their album of the month every month unless you remembered to send back the piece of paper telling them you didn't want it.  I don't actually remember if I ever wanted to keep one of their monthly selections, but I do vividly remember carefully poring over their catalogue to make sure I got the most out of my selection of "free" albums.  I still didn't have many CDs at this point, so this was a BIG DEAL for me. I might have been reading Kerrang and Metal Hammer (and thought that I loathed bands like The Cure, The Smiths and the Stone Roses), but I was clearly curious about a wider world of music and wanted to explore.  I didn't have any guidance, so I used this catalogue as my route to finding out more. 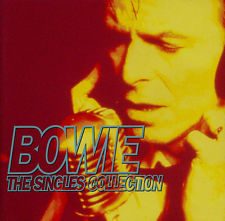 The names of four of those albums have been lost in the mists of time and my fading memory (I think one of them was Neil Young Unplugged), but one selection still sits proudly in my collection to this day.... The David Bowie Singles Collection.  It was a double-CD too, taking up an extra big space on the shelf in the days when double-CD cases were massive.  I don't know why I picked David Bowie, but I was fascinated especially by disc 1, nineteen tracks running from Space Oddity to Sound and Vision.

Starman was my favourite at the time, although it seems so pointless now trying to pick a favourite from such a vast selection.  On the day he died, I found myself sitting at my desk at work singing "Sound & Vision" under my breath.  It's not as obvious as something like "Heroes", but there's genius in a three minute track in an unusual time signature where the singing doesn't even start until the song is halfway through.  He really was a unique talent.

Lots of people are bored by the outpouring of emotion that seems to accompany the deaths of anyone even remotely famous..... but David Bowie was different.  He was a giant and he leaves us with an extraordinary legacy of towering achievement.

Don't be too sad though, as this (often hilariously misattributed) tweet said: 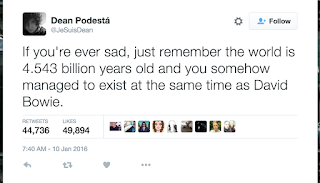 I also loved this tribute by Billy Bragg on his Facebook page, and make no apologies for quoting it in full:

"Turning on the radio this morning and hearing the Archbishop of Canterbury talking about how much David Bowie had meant to him was surreal enough, but the fact that he was talking about him in the past tense stopped me in my tracks. Bowie was a key figure in my adolescence, the first star from outside of my comfort zone that I really identified with.

All of the artists that me and my mates at school listened to were reassuringly heterosexual: Slade, Rod Stewart, Status Quo. Bowie was something else. As 14-year-olds in 1972, if we knew anything about him it was that he was a ‘bender’ - in the spiteful parlance of the playground - and so best avoided. Then I heard ‘The Jean Genie’. With no foreknowledge of the Velvet Underground, this just sounded to me like a thumping great dose of bootboy pop that beat Slade at their own game. I was hooked.

When ‘Aladdin Sane’ came out a few months later, the open gatefold sleeve was displayed in the window of the local record store: Bowie standing, hands on hips, naked except for the red/blue lightening bolt across his face. The fact that he had no discernable genitalia seemed only to confirm that he was not as other men.

Coming out as a Bowie fan would leave me open to jibes about my own sexuality, but I couldn’t resist the sock hop pop of ‘The Prettiest Star’ and the fretful grandeur of ‘Drive-In Saturday’. I took the record into school and found that, rather than being called names, it made me more popular with the smart girls in our class who got together in the lunch break to listen to ‘Hunky Dory’. Bowie's androgyny - making him popular with both boys and girls - had created a bridge across what had been, for me, an unfathomable chasm.

After he played Romford Odeon on the last leg of the Ziggy Stardust tour in April 1973, the whole of the 4th year seemed to go Bowie mad. My parents wouldn’t buy me anything androgynous to wear, but I did take the cover of ‘Aladdin Sane’ to the local barber’s to get the ‘Bowie cut’.
I remained a huge fan of his work as he has moved effortlessly forward, engaging with new ideas and media. I ended up spending my life with a girl who saw the Ziggy Stardust tour and we take great delight in the fact that our son has grown up to be a huge Bowie fan.

But whenever I hear his music, I’m a teenager again, taking my first taste of something ungendered, transgressive. At a crucial moment in my adolescence, David Bowie showed me that masculinity wasn't the only way to attract girls and, for that, I thank him."