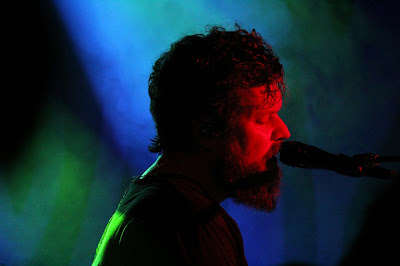 The last time I was in the Octagon, I was in the band. Well, I was in the choir, anyway. This was the venue of my first big concert with my choir this time last year, where we sang some rock classics, supported by an actual live band. I have to say that it was a little strange to be walking back into the same venue to watch a proper concert, because I’ve never before had the experience of watching a gig somewhere that I’ve actually performed before. I imagine Elton gets this all the time....

A midweek gig in Sheffield is clearly a bit of an adventure for someone who is increasingly tucked up in bed by 10pm after an evening of snoozing on the sofa, but it turned out to be pretty easy. I’ve never used a tram in Nottingham before, but hopping on the Supertram at one of Sheffield’s park and ride stops was simplicity itself, and the stop at the university was barely a 2 minute walk from the venue. There was even a convenient pub to have tea. A pub called the University Arms on the edge of the University site sounds deeply unpromising, but it turned out to be a little gem. Being a student has changed a bit since I was there, I have to say. Craft ale is lovely, but it’s not cheap….

A few curious people asked me who I was going to Sheffield to see, but most had never heard of John Grant. When they subsequently enquired what he was like, I was stumped almost every time. How do you describe John Grant’s music? The first thing that comes to mind is his wonderful, but incredibly personal and sometimes graphically descriptive lyrics…. But that doesn’t tell you what he sounds like. Well, sometimes it’s just him and a piano, sometimes it’s a full band, sometimes a bit country and western and increasingly it’s sort-of disco. Does that help? Not really. Describing him physically clearly doesn’t help either, but I often also found myself carefully explaining how he was bearded and had what I would describe as a corn-fed midwestern kind of a physique. I never once explained his HIV status. I guess that my difficulty in putting him into a convenient pigeon-hole just goes to show what a versatile musician John Grant is.

Support was an engagingly dotty Icelandic girl called Sóley. She has more than a touch of Bjork about her, but she is clearly a talented musician, either on guitar, keyboard or making clever use layering to repeat various parts as she built a song onstage. She got a tattoo in Newcastle, she told us shyly, but sadly never showed us what it was. I started her set feeling disengaged, but she had my attention by the end.

John Grant’s music might lead you to believe that he’s an intense man. Perhaps he is. It’s dangerous to speculate, but it’s pretty likely, I would guess, that when he wrote some of these songs, he wasn’t in the best place. Looking at the guy who bounces onto stage tonight with a broad grin to acknowledge the rapturous welcome from the audience, he seems to be happier now. He’s charmingly awkward, addressing the crowd with shy looks and sweet little smiles… but he seems to be genuinely enjoying himself: enjoying the energy and love from an enthusiastic crowd and from his sparky band, featuring Budgie on drums. He has us eating from the palm of his hands from the moment he walks to the front of the stage and tells us that he’s delighted to be in the centre of the universe. Yeah, yeah. I bet you say that to all your crowds…before he then reels off a list of musicians from Sheffield: Richard Hawley, the Human League…. And you think that he might actually mean it. In fact, he’s so eager to please, that he actually wheels out Richard Hawley to join his band for the last song of his main set and the first song of his encore. I can’t work out if Hawley is delighted or just bemused to be there at all. Probably both. 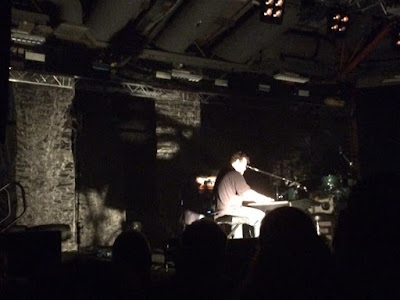 It was a bit of an odd crowd: quite 6 music, as you would expect, and I saw at least one big, bearded man wearing a t-shirt with the slogan “BEAR” emblazoned across the front. I found them often slightly irritating, but only mildly so…little rudenesses, but nothing more than that (I can forgive the girl who was waving her hands around and touched my face, even though she was mortified.  I would have preferred her not to sing-along, mind you...). Fortunately, John Grant is so transcendently good that all these things are quickly forgotten. It always helps when the main act actually looks like they are pleased to be there, and John Grant can hardly stop himself from beaming. He’s not a big or particularly good dancer, but he does make lots of little subtle movements to show how much he’s enjoying himself; he conducts his band; he taps a foot; he tosses out little moves and throws sidelong glances and smiles at the crowd, engaging us with mildly flirtatious smalltalk. He’s captivating. The band are good, but it's hard to take your eyes off the main man.  And the songs….oh, the songs. His magnificent bass-baritone voice soars, and those intensely personal lyrics spring to life. Surely you can’t ever perform songs that intimate without reliving them a little each time, can you? Can you ever really detach yourself emotionally from them? Only John Grant can answer that. The lyrics are sad, bitchy, potty-mouthed and often intensely funny.... but he sings them with a smile.  It's mesmerising.

I'm not even going to try and talk you through the songs he played as there's just no way I could do them justice.  Suffice it to say that Grant was sublime. My personal preference is for the songs off his first album, "Queen Of Denmark"; they're almost country and western tinged in places and are quite different from some of the more disco numbers that he's been recording on his later albums (which are also excellent).  His most recent album, "Grey Tickles, Black Pressure", well represented in the setlist here, is something of a blend of the styles from his first album and the more beat-orientated songs on "Pale Green Ghosts". It also has some proper, laugh-out-loud lyrics too.  In Sheffield, Grant plays a pretty decent mix from all three of his albums, even throwing in a Czars song for good measure.  He's onstage for maybe 90 minutes, but I'm captivated.  His voice is an extraordinary instrument, and it's mesmerising to watch him perform.  And as if I wasn't enjoying the evening already, Grant also confirmed onstage that he will be playing Glastonbury.  Well, hurray for that.

Grant's bass baritone is pretty much my singing register, and it's fun to imagine which of his songs I could audition at choir.  None of them, is the simple answer.  I just can't find one where the lyrics wouldn't be problematic when sung in a church; or in front of an audience including children; or people of a sensitive disposition....  He's a genius. There are thousands of musicians in the world, and many of them sound the same and not many of them are telling you anything new.  Well, John Grant is different. If you aren't familiar with his music, then don't just take my word for it... do yourself a favour and give him a listen.

I can sense I'm starting to gush, so I'll just leave it there.  A fantastic gig, and well worth a little schlep up the motorway on a schoolnight.

Setlist: Geraldine, Down Here, Grey Tickles, Black Pressure, Marz, It Doesn't Matter to Him, Pale Green Ghosts, Snug Slacks, Guess How I Know, Glacier, Queen of Denmark, GMF (with Richard Hawley). Encore: Voodoo Doll (with Richard Hawley), You and Him, No More Tangles, Drug, Caramel
Posted by swisslet at 22:02