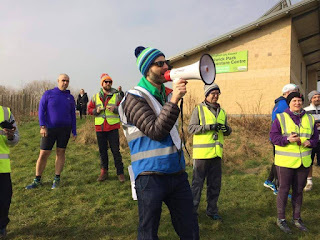 It was kind of a busy weekend.

It started early on Saturday morning, when I took a break from my marathon training to make my debut as Run Director at Colwick parkrun.  I love parkrun. I avoided going for about a year because I thought I knew myself too well, and that a timed 5km run would see me want to flog myself relentlessly every week.  It was like that for a few weeks, but after a little while, I discovered that I actually enjoyed volunteering more than I did the actual running.  Parkrun is incredibly inclusive and welcomes people of all shapes and sizes and all speeds.  More than that, Colwick is a real community.  What started with guiding Terry, over the course of about 15 months or so, ultimately culminated with me taking hold of the megaphone.  We had a record attendance too, with some 366 runners - a good 125 or so more than we normally get and comfortably more than our previous biggest attendance.

Of course, I didn't do this on my own. I was carefully prepared through the week by a very attentive member of the core team, and then a crack team of volunteers took over as I ponced about with the megaphone.

It was a good morning.  Here's the run report I wrote.  I enjoyed it so much that I'm also doing it all again on 2nd April.

Straight after that - after a short detour to solve a minor crisis at work - we drove down to Bath to take part in the half marathon.  It's supposed to be flat and fast, but the purpose of taking part wasn't to race but to practice race conditions for the marathon.  Obviously, I was running quite a lot faster than marathon pace, but I consciously eased down a little after halfway.... but still managed to accidentally improve my PB by 40 seconds.  Good job I didn't stop for a pee, eh?  I don't really race half marathons any more. In fact, I think that PB comes from the last one I ran hard... the Robin Hood in 2012.  Running is a very relative thing, and I"m aware that lots of people would quite like to have a PB of 1:51:19, but I'm actually slightly embarrassed because I actually think it should be at least 5 minutes faster. Another time, perhaps. 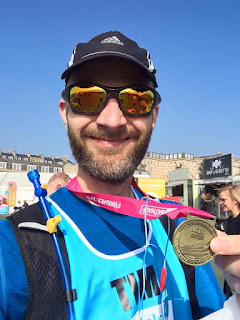 Still, it was a nice weekend with a couple of nights away in a nice town.

Training has been a bit of a grind this year, and it was nice to break it up a bit with a mere 13.1 miles with 15,000 other people instead of running on my own around the Big Track alongside the Trent.  In spite of the London Marathon Facebook page saying that it was nearly time to taper, the next few weeks contain all of my longest training runs: 18 miles this Sunday, then 20 miles, then 22 miles... so there's still a fair way to go before the starting line just yet.

This is what it's all about, of course. We're raising money for the MS Trust, and you can sponsor us here...
Posted by swisslet at 21:56