Sunday was the climax to the Spring season at choir, with a big concert at the Lincoln Performing Arts Centre.  The choir actually did two performances on the day, but I only sang in the matinee because I'm currently mindful of how much energy I'm expending in the build-up to Sunday's little run. 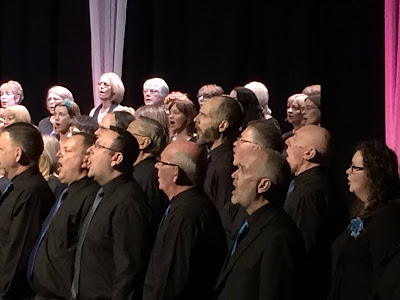 It's all about the bass....
The concert went really well, and we played to a packed auditorium, but it's been a bit of a bumpy season: I was initially quite keen to sing a solo, but for various reasons, decided not to go ahead with it... and with hindsight, I'm really glad I didn't.  It's not that I don't think I'm capable of singing to the standard required, it's just that I think I'd underestimated how much of my mental and physical resources training for the marathon would take this year.  Much more than last year, anyway.

I've really enjoyed singing with the choir over the last year or so, and part of that enjoyment comes from the fact that you have to put in a fair bit of effort to learn your part well enough to be able to sing it without your book.  It's easy enough to turn up to rehearsal each week and sing, but to take it up to the next level, you need to be able to take your nose out of the book and commit to following the prompts of the musical director.  To do that, I find that I have to spend an awful lot of time listening to the rehearsal tracks of my part, downloaded onto my iPod.  If you listen to that enough, you start to learn your part, which is especially important if your part doesn't follow the tune, which is usually the case as a bass.  It really needs to be second nature.. which is actually pretty hard, especially if you know the song you're learning.

This season's songs included several that I thought I knew really well.  Probably the hardest was "The Sound of Silence" by Simon and Garfunkel, which is a great song but I had to work to actually learn the lyrics and to learn which bits I'm not supposed to be singing.  Even a song as seemingly simple as "Here Comes The Sun" turns out to be a bit of a nightmare of changing time signatures, requiring concentration to get right.

The net result of all this is that I basically listen to nothing by my rehearsal tracks for weeks.  This means that one of the greatest joys of finishing a season is that I get to listen to something else!  Since last Sunday, I've worked my way through some Muse, some Guns n"Roses, AC/DC, Soundgarden, a bit of Iron Maiden, Black Sabbath, Beastie Boys....

...the bad news is that the new choir season starts in exactly a week's time.  The rehearsal tracks are actually already available to download, but I'm just nowhere near ready to make that sort of commitment quite yet.
Posted by swisslet at 20:48

Email ThisBlogThis!Share to TwitterShare to FacebookShare to Pinterest
Labels: choir, not running