low down and travelling...

I've got to be honest with you.... I can't wait for this bloody referendum to be over.

I got a personally addressed flyer in the post from the "Vote Leave" campaign yesterday and it just annoyed me intensely with the very basic lies that it was telling. 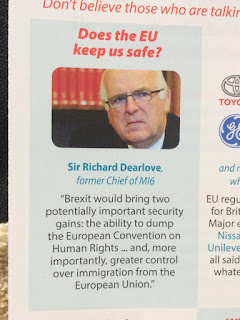 That's a face he's got on there, isn't it? As my friend Ali said on Facebook, "He looks like he has piles and had to sit on a hard chair drinking grapefruit juice during a meeting where his views were ill received, and he's just been given a memo informing him his birthday party has been cancelled due to lack of attendance".  Yes.  That.

And as for what he's saying...well....DOWN WITH HUMAN RIGHTS, right?  Oh hang on, the European Convention on Human Rights has absolutely nothing to do with the EU, and a vote to leave will have literally no impact on that simple fact.  So that's just a total lie, isn't it? A simple google exposes that and other lies on this flyer, but people will believe it.

It's just absolute garbage that is either shockingly ignorant or is deliberately lying to try and influence the result of this referendum.  Either way, that's pretty poor.

It's not that the Remain side is much better either.  I watched George Osborne in an interview the other day talking about how a vote to leave the European Union would have a devastating effect on the lives of hard-working people in Britain.  Hold on... this is the same man who has clearly shown in the last six years of government that he doesn't actually give a damn about the hard-working families of this country?  Yes.  The very same man.  If you really care about the working man and about the future of the NHS, then what have you been doing since you formed a government in 2010?

It's exhausting and the level of debate has been depressingly down in the gutter.  My Facebook feed is generally a self-selecting audience of people who have more or less the same views as me, but even there I've seen some distinctly unsavoury and -- in my opinion -- deeply ill-informed opinions being shared. Maybe it's true that Obama had no business getting involved in this debate, but to share a post that was casually racist about the French, the Americans and the Germans and featured a comment with a picture of the president with the caption "Just another muslim coming to our country and telling us what to do.... well, how do you have a rational conversation with that?

It's my own fault for being unable to walk away obviously. I hope I don't lose any friends over this, although you do have to wonder what some of them are thinking... if they're thinking at all. The myth of Great British exceptionalism is clearly very much alive and well. 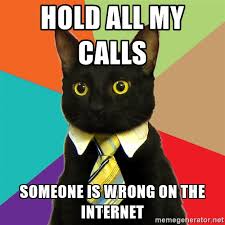 I'm starting to doubt that anyone, on either side of the debate, has ever actually changed their minds. I know I haven't... but to my mind, I haven't seen a single cogent argument to leave the EU that isn't based in wishful thinking.  I'm sure many people on the other side of the debate would say exactly the same thing.  ("Don't talk to me about the last 50 years of peace in Europe.  That's all in the past."  ARGGGGGGHHHHH!)

There are still two full weeks of this nonsense to go.

I'd wish it was all over, but there seems to be a very real possibility that the Great British public will vote to leave the EU in this referendum, and that is truly depressing.
Posted by swisslet at 23:16