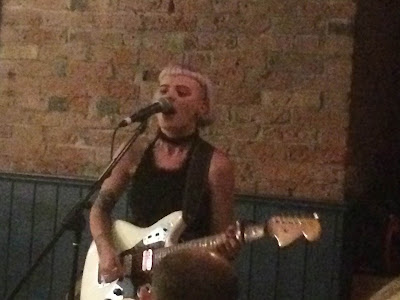 [review to appear on the Leftlion website at some point....]

The Old Angel in the Lace Market was always a reassuringly grungy presence amongst all the trendy bars of Hockley; a real pub and an excellent live music venue. When it closed earlier this year, with news that it was to re-open as a micro-brewery, it felt a bit like another landmark venue in Nottingham’s cultural life was disappearing forever and that the hipsters were taking over the world. Tonight’s gig is the first to be held in the venue since the renovation and provided a good opportunity to have a look around to see what they’ve done with the place. First impressions are good: the place looks broadly the same, only with really good beer (I recommend the Snake Eyes). A few things have even changed for the better: the toilets are equipped with Original Source coconut and shea butter soap. Imagine!

Tonight’s gig is promoted by Full Focus Events – a relatively new operation, set up at the start of this year and master-minded by Brad and Jack. They’ve been running regular events around Nottingham, and ReSoNaTe represents the cream of the crop from those nights. This is the second such showcase, shifted at short-notice to the Angel due to the closure of The Loom. The upstairs room here isn’t quite ready yet, so we’re forced to improvise downstairs with one speaker and more limited space. It doesn’t matter: the atmosphere is good and the sound is fine. This being the future, we even have a live stream provided by the Colour Hits Channel.

There’s a good varied bill on tonight too: opening the bill is Paul Walker, a veteran singer-songwriter with a gravel throated delivery and a nice line in bluesy slide guitar. The set consists a few original songs mixed in with the odd well-chosen cover, like a very Tom Waits-y version of “After Midnight”. It’s a good start. Next up are some South American vibes from Hugo Ivo, by the sound of it supported by a good slice of Nottingham’s Brazilian community. He looks a initially a touch shy behind his keyboard, but he’s got a sweet voice and mixes his own songs with covers of “Ain’t No Sunshine”, Vance Joy’s “Riptide” (on the guitar) and Keane’s “Everybody’s Changing”. He’s got a sweet voice and is clearly a real talent. He’s apparently off back to Brazil next month, but if you get the chance to see him, then I would heartily recommend you make the effort. Next up is Holly Taylor Gamble (pictured above) -. She looks small and fragile behind her enormous guitar, but looks can be deceiving and, after a bit of fussing over her tuning, she proceeds to rock our socks off with a kicking cover of Britney’s “Toxic” and a handful of her own songs. She reminds me very much of “Rid of Me” era PJ Harvey and is clearly something of a force of nature and an artist very much to be reckoned with. Well worth checking out. Last up tonight is Daniel Ison. Daniel is a veteran of the Nottingham scene and wryly tells us that he started out gigging on the same bill as a young singer-songwriter called Jake Bugg. Whatever happened to him? I’ve seen Jake Bugg perform, and I think it’s fair to say that he has nowhere near the onstage charisma of this guy. He even pulls off that old trick where he pulls a pretty girl out of the audience and asks her to hold his harmonica for him as he plays…shameless (and he asks a couple of lads to help him later on too). He plays a good set of his own songs (“psychosluts” is a particular highlight) and some fun covers like X-Press 2 and David Byrne’s “Lazy”, “The Clapping Song” and a slightly unlikely fusion of the theme tune to the Fresh Prince of Bel Air and “I Wanna Be Like You” from the Jungle Book. It’s a great way to end the night.

ReSoNaTe Is going to be a monthly fixture at the Angel, with the next one scheduled to take place on 18th August. Do yourself a favour: get down there and check them out.

[full disclosure: Jack and Brad work in my office...I needed a favour from Brad last week and when he agreed, I felt it was only fair to offer him something in return.  A review on the Leftlion website seems a relatively small thing to do.  And Jack bought me a pint.  It was a good night though and I'll be back!)
Posted by swisslet at 20:58