you watched yourself gavotte... 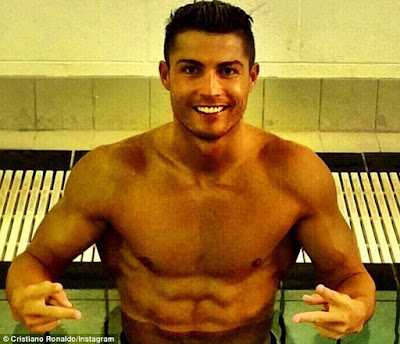 Whilst he’s clearly a talented footballer, there’s something about his oleaginous smile and the way he preens and poses on the pitch that really gets my goat. He might be the best player on the pitch, but surely even the very greatest player understands that football is a team game, and he needs his teammates to succeed in order to succeed himself. It’s often said that the difference between Ronaldo and Lionel Messi is that Messi would give up all his individual awards for team success, and that Ronaldo would do the opposite. There’s something delightful about the fact that Ronaldo is statistically one of the greatest players to grace the game, but that he isn’t even the greatest player in the Spanish league. Does Ronaldo think that this theatrics on the pitch, where he berates his team mates when they don’t pass the ball to HIM, help or hinder? Nani has over 100 caps for Portugal, but he always seems to look terrified of what Ronaldo will think if he decides to take a shot himself.

I sat down to watch yesterday’s final, eager to see the French wipe the smile off his smug face. Portugal barely deserved to be there anyway, and wouldn’t it be a great story if the French could win their own tournament (not to mention the fact that I have a French wife who was wearing her French t-shirt and bellowing out the French national anthem).

And you know what? Over the course of the game, Ronaldo changed my mind.

It was the injury that started it: I might have been happy to see Ronaldo beaten, but I wasn’t ready to see him crying real tears as he was forced to leave the pitch on a stretcher early in the game because of injury. He’d tried to carry on, but it was quickly clear that he couldn’t stay on the pitch. He tried to cover his face, but his absolute desolation was laid bare. I looked at him and, rather than a self-regarding idiot, I saw a man who had worked unbelievably hard to get to this point and had his dreams and hopes dashed. I don’t know about you, but I didn’t have a hard enough heart to feel anything other than sympathy for him at that moment.

In truth, my opinion on Cristiano Ronaldo began to shift earlier in the tournament. In many sports, the players often line up in the tunnel waiting to be brought out onto the pitch. They often have small children with them, mascots who are lucky enough to hold hands with the players and to walk out onto the pitch with them. I like to watch how the players respond to this: many are totally focused on the game ahead of them and are almost in another place as they visualise the game. These people barely notice the mascots at all, and it’s hard to blame them. Some players – and Chris Robshaw in the England rugby team is one of these – are able to step outside themselves and make an effort to ensure that these kids are okay and that they are having an amazing time. Robshaw will often crouch down with his escort and do his best to put them at ease. It’s lovely to watch. Whatever your preconceptions of the kind of person Ronaldo might be, he’s also in the Chris Robshaw camp with the player escorts, and will spend a couple of minutes chatting with them instead of staring, glassy-eyed down the tunnel waiting to be called out onto the pitch.

At some point during the game yesterday, Ronaldo came back pitch-side with his leg heavily strapped up, and he gave me more reasons to reconsider my view of him. As a player on the pitch, it always seems to be about CR7. The champions league final this season was a case in point: Ronaldo was barely fit and was a peripheral figure for the whole game, carried by his team mates to the penalty shoot-out. When Ronaldo scored the decisive penalty, he talked expansively about how he had a “vision” that he would score the winning goal… ignoring the fact that a penalty isn’t a winning goal, and that his team-mates had carried him for 120 minutes to put him into that position. On the sidelines of the game last night, Ronaldo could not influence the game on the pitch with his own skill, and so instead he threw himself wholeheartedly into supporting his teammates, willing them to success. When they won, he was crying tears of joy as the supposed one-man-team won the game without him. Yes he changed back into his playing kit, complete with captain’s armband, to pick up the trophy, but it was too late now… my view on him had shifted and I could no longer feel anything but pleased for him.

Sometimes we’re too quick to judge. Even if, for all this change of heart, I probably still won’t be rushing out any time soon to buy myself some CR7 underpants… 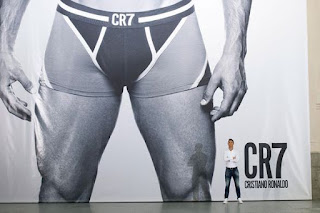 ...tempting though it is.

But for last night at least, where before I had only seen an arrogant, entitled man-child, I was able to see the dreaming fan and the vulnerable human being in Cristiano Ronaldo.  It was a bit of a surprise to me to be honest, but there you go.  I must be gaining some empathy in my old age.

*opinion subject to sudden change when I next watch him preening around on a football pitch next season...
Posted by swisslet at 21:12