Rather than go on at great length about our recent trip to Switzerland, Germany and Austria, I'm just going to leave you with some photos.

OK, and maybe a bit of aimless waffle too.  My gaff, my rules. 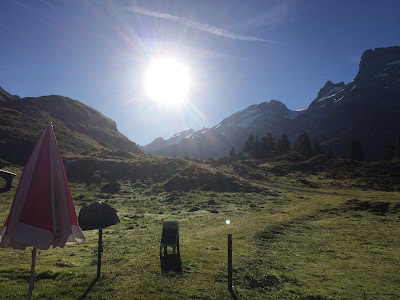 Here's the view from the mountain hut in the middle of the Swiss mountains where we spent the night celebrating the wedding of our friends Sina and Patryk. We slept in bunk beds and swam in a mountain lake fed by snowmelt from the snow-capped peaks.  Yes... it was bloody cold. The night sky (including the Perseids - at least the one that I saw) was absolutely stunning.  Switzerland is a beautiful country... absurdly expensive, but beautiful.  I also bought this t-shirt.  Look at that pipe! 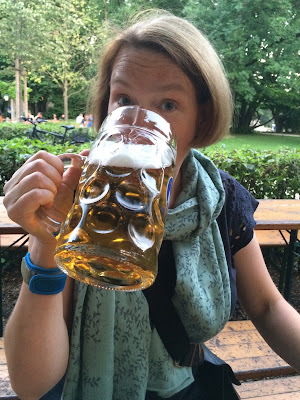 My wife with a Maß of beer in Munich.  My beer (she likes the froth), but I love this photo. I also love the fact that they only serve beer in portions this size after 5pm.  Nevermind the Picassos, Durers, Gaugins, Monets, Rembrants, Rafaels and Leonardos we saw at the Pinakothek galleries in the 24 hours we were there... THAT'S culture! 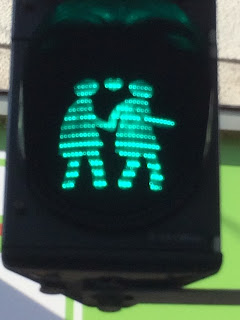 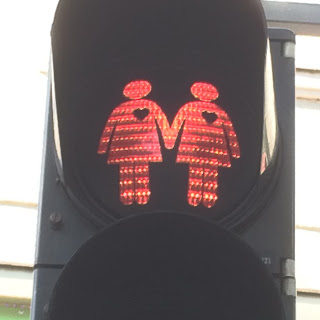 We saw these in the 7th District of Vienna.  They also have one's with boy/boy and boy/girl.  Apparently they were very controversial when they were first put up, but I think it speaks volumes for how far a Catholic country like Austria has come in recent times.  It's such a simple gesture of inclusion, isn't it?  We travelled between Munich and Vienna on the train. Over the course of the 4 hour journey, we chatted with the nice German ladies heading to Vienna for a long weekend. They were asking what we would recommend they visit, and my wife turned and asked what I thought.  I was genuinely stumped.  I've been many times over the last 15 years - we got married there, for goodness sake - but, although I've been to many of the galleries and palaces and museums, a trip to Vienna will always be about seeing our friends and enjoying spending time with them.  This time was no different.  I do need to go back to the Kunsthistorisches museum, but given a choice between that and a trip in the Punto to the Wachau to drink apricot juice and wander up to the castle where Richard Lionheart was kept prisoner... then I'll take the Wachau everytime.

It was a lovely break.
Posted by swisslet at 20:28