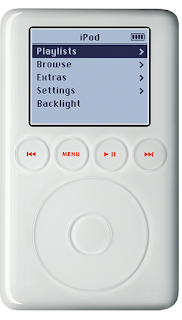 Back in the day, it was an iPod that was my first introduction to Apple.  It was one of those rare devices that absolutely and immediately changed my life: in this case, by completely revolutionising the way that I listened to music.  I was one of those kids who was always taping things off the radio; I made mixtapes for people well into my 20s (it seems ridiculous to think about it now, but writable CDs weren't really a thing for most people for a really, really long time.  Long after all my music was on CDs, the only really practical way of making a compilation was to use a cassette).  I had a minidisc for a while, and that was okay but distinctly limited by the fact that not many people had minidisc players.... which may be at least part of the reason why that didn't really work out as a format.

I think my first iPod had a capacity of 30gb and I was suddenly able to carry around so much more music in my pocket... although, because my music was almost entirely on CD, I also had to learn how to rip CDs into MP3s first.  I then had to buy and install a firewire connection for my PC to be able to connect my new device to my computer.  I don't know about you, but how many times have you opened up a PC and installed a card? I worked in IT and it was my first time.  On top of all that, Apple hadn't made a version of iTunes for the PC yet, either... so I was forced to use something called "Media Jukebox" by JRiver (I haven't used this in over a decade and I think they still send me emails).  So I started ripping CDs onto my hard drive, and the choices I made then can still be seen in my library of MP3s today: every new CD that I bought was ripped immediately, but I selectively went back through my back catalogue, and loads of the CDs I didn't rip then have never been added since. The process of ripping a CD took ages on my old PC, and I just didn't have the time or patience to rip my way through a back catalogue of 1000 or so CDs... so I made some choices, and I'm still living with those choices today.  I guess I'm a completist, but not *that much* of a completist. Pah.  Evict me from the man club.

iTunes arrived for the PC eventually, and I moved my library over and downloaded my first track from the Apple Store.  79p for "Vertigo" by U2.

I loved the old iPod.  Even when Apple did everything they could to move us into newer technology, I loved being able to buy a device that had storage big enough that it was capable of holding my whole music library and I didn't have to choose what I loaded.  For me, the 160Gb iPod classic was where it was at.  I had an iPhone and used that for my day-to-day consumption of music, choosing playlists and albums that I wanted to carry with me all the time... safe in the knowledge that I always had my classic, and my classic had everything.

...and then Apple stopped making it.

Lots of people made a massive fuss about this and seemed angry at Apple for taking this choice away from them.  I sort of understood where they were coming from, but what the hell did they expect Apple to do about it?  They'd decided to move on, and that was that.  I was a touch worried that I wouldn't have the choice of something with this much storage, but my (second) classic was still pretty new, so it wasn't something I needed to lose any sleep over quite yet.

When we went on holiday to Switzerland and Austria this summer, we were going to be driving around everywhere, and I thought it would be nice to be able to listen to some music, so I packed the classic.  In truth, I'd been using the playlists on my iPhone more and more, but I still liked the idea of something with everything; something that had the whole of "Surf's Up" by the Beach Boys and not just a playlist of the band's greatest hits.  I quickly discovered something that Apple already knew: the iPod classic has a spinning hard drive and not solid state storage; it's built on old technology... and in the car we were using, it was painfully slow and crashed every couple of songs, requiring a full reset each time.  Needless to say, I just used my phone for music.  Suddenly, the iPod classic felt every bit an almost obsolete piece of technology.

Imagine my delight when I upgraded my phone to an iPhone 7 and discovered that I once again had a device with the storage capacity to easily hold my entire music collection.  In fact, the 256Gb storage capacity of my new phone is in fact significantly bigger than the 160Gb of my old iPod classic.

Naturally, in the time since I've started curating a digital music collection on my hard drive, I've bought a record player and started buying 180g vinyl, sometimes of music that I already own on cassette, CD and on MP3.

That's just the way of the world though, eh?
Posted by swisslet at 21:40