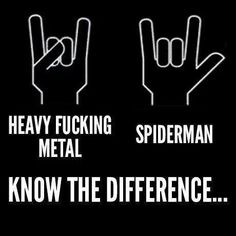 Metallica have just released their first studio album since 2008.  It's receiving some decent reviews, but Metallica being Metallica, there are also plenty of haters lining up to complain that this album isn't anywhere near as good as [insert name of Metallica album here, probably from the mid-1980s, but if feeling awkward then Load].

I'm quite keen to give it a listen.

Sadly I can't.  Not for another couple of weeks, anyway.  And it's all my own bloody fault too... totally self-inflicted*.

It's nearly the end of the season at choir.  In just over a week, and with two more practice sessions to go, we'll be into the Christmas concerts.  I want to perform these 'books down' so that I can concentrate on the cues from our musical director, but this means that I need to actually learn the damn songs.  Unfortunately, this means that I have spent an inordinate amount of time over the last few weeks listening to nothing but my choir rehearsal tracks - rather dull MP3s that very plainly highlight the voice part that you're trying to learn.... bass, in my case... and pretty much nothing else. They certainly don't highlight the songs to their best effect, anyway. 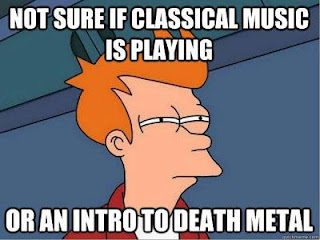 This works up to a point, helping you to learn your voice part (they're especially useful if you think you already know the song, when actually you know the melody but not the harmony you'll be singing).  But there are always a few songs that refuse to completely go in... the final 15% just seems to get stuck and you need to put in that bit of extra effort to get them properly learnt.

Sadly, for me, from this season's songs, the ones that require the work are:

...so I'm spending all my spare time at the moment listening to a crappy backing track version of a Shakin Stevens song that I hated before we even started the season.

Brilliant.  It's about the least metal reason there could possibly be for not listening to the new Metallica album.  I defy you to think of a less metal reason than that.

Email ThisBlogThis!Share to TwitterShare to FacebookShare to Pinterest
Labels: choir, not metal