rolled and rumbled past my door... 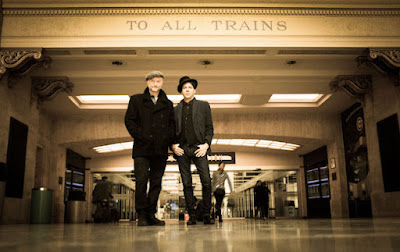 So slack has my gig reviewing become that I’ve left it nearly a whole week before getting round to writing up this one. Well, better late than never. If you want to read a proper review of this gig, then you should head over to David Belbin and read the extended version of the write-up he did for the Evening Post (I have Dave to thank for the setlists too).

I’ve been a Billy Bragg fan now for 29 years. That’s a pretty long stretch by almost anyone’s standard, and can only really be matched by the likes of Iron Maiden in my record collection. The somewhat straightforward pleasures of Iron Maiden, bless them, haven’t quite provided the intellectual and emotional stimulation of the Bard of Barking over the years. Tonight, he’s performing with an old friend, Joe Henry, who, as an American abroad, immediately tells us that he feels he needs to say something about the result of the US Election: “It’s where we are. It isn’t who we are”. They’re touring “Shine a Light”, a concept album of railroad songs in the great American tradition. They recorded the songs in waiting rooms and hotel rooms as they travelled the 65 hours and 3000 miles of railroad between Chicago and Los Angeles. The railway, so they told us, is so much more evocative a form of transport than any other; it symbolises dreams and escape in a way that aeroplanes and cars (unless driven by Bruce Springsteen, Bragg quips) never quite have. Trains, of course, played a fundamental part in opening up the USA, but it seems that they are barely used as a means of passenger transportation at all these days, with some of the trains they caught in the South only leaving once per day, or even every other day. It’s all about freight nowadays, and apparently the USA ships more cargo by rail than any other nation in the world. 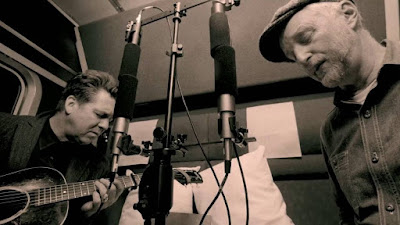 Of course, the songbook they’ve chosen is deep and rich and resonant. At one point, Joe tells us how these songs are the language of American culture; every bit as rich and relevant as the works of Shakespeare. He grew up with this stuff in his blood, and Bragg is no recent convert. “We’re making Americana great again” he says, to groans of “Too soon” from his American friend.

The Playhouse is a good venue to see a band. I think I’ve only seen one other band perform here (The Duckworth Lewis Method) and Billy Bragg’s more normal habitat in these parts would be Rock City… but there’s something about the packed and attentive audience seated in the auditorium that suits these songs. The two men perform together, then we get a solo set from Joe, an interval, a solo set by Bill and then some more songs from the pair of them. An obvious highlight in the first section is their cover of Leadbelly’s justly famous “In The Pines”, familiar to most people in my generation as the “Where Did You Sleep Last Night” so memorably covered by Nirvana on their Unplugged album. I’m less taken with Joe Henry’s solo stuff. It was my first listen to most of this, so perhaps it’s unfair to judge, but it felt to me as though he didn’t have a very light touch with his lyrics. He’s probably most famous for the work he did as producer to Allen Toussaint, and it’s no coincidence that I thought the best of the songs he performed in his set was his cover of Toussaint’s “Freedom for the Stallion”.

I last saw Billy Bragg at Glastonbury the day after the results of the Referendum. His set that night was electric as we like-minded souls gathered together in the hope that he would make us all feel better. It’s only been a day since Trump’s victory in the Presidential election, and I find myself again looking to Billy for some comfort. He opens with “Between the Wars”, cutting the song short before the line “Sweet moderation, heart of this nation” and seguing straight into “Help Save the Youth of America”. He also plays a cover of Anais Mitchell’s "Why We Build the Wall"... which of course has particular relevance now.

It’s a really good gig. The album is good and the two men are clearly comfortable with each other onstage and their voices dovetail together well. As ever with Billy, it’s the bits between the songs that stand out nearly as much as the songs themselves, and there’s a good story to tell about every one of these songs, both in their history and in where Bragg and Henry were when they recorded them.

It might be an increasingly crazy world, but Billy Bragg continues to provide me with the same anchor of stability that he has since I was thirteen years old and just starting to see beyond a musical world of heavy metal. Long may it continue.

Encore:
Gentle on My Mind
Tonight I’ll Be Staying Here With You
Ramblin’ Round
Posted by swisslet at 19:51