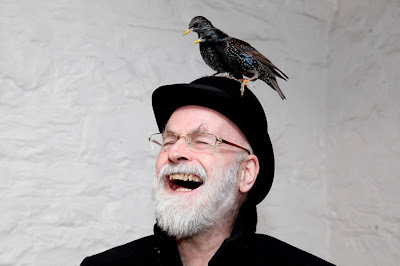 Terry Pratchett was a very wise man. He died in 2015, but it’s somehow comforting to look back on some of his writing now and to see what a clear-eyed grasp he had of what it means to be human. His characters were often trolls or dwarves or vampires, but they were nevertheless all acutely observed, clear-eyed character studies of the human condition.

I started reading his books when I picked up the first Discworld novel quite by chance at the age of thirteen, and they were a pretty solid staple of my reading life from that moment onwards (although I haven’t been able to bring myself to read the last few books, partly because I don’t want to see if his writing deteriorated towards the end, but also because I don’t want to read them knowing that there will never be any more to read). People often sneered at him as a writer of fantasy books, as though the genre itself made the writing somehow less worthy, but I can honestly say that I can’t think of another author who has quite the same grasp on humanity; how ridiculous and petty and cruel and wonderful we are.

The world currently seems to be a very scary place indeed. Indeed, as Pratchett’s Death notes in “The Thief of Time” , the chief aspects of humanity are ARROGANCE, PRIDE AND STUPIDITY… a point we seem to be proving rather well just now.  Rather than dwell on some of the more depressing aspects of the week’s news (who would have thought it would be possible to bring one of world’s leading democracies to such a state of crisis within a mere fourteen days?), let’s just laugh along with pterry about quite how ridiculous we are.

“Some humans would do anything to see if it was possible to do it. If you put a large switch in some caves somewhere, with a sign on it saying ‘End-of-the-World Switch. PLEASE DO NOT TOUCH’, the paint wouldn’t even have time to dry.”

The point is not that we will push the button to see what happens, it’s the fact that this is so achingly predictable and that we’ve pushed that button before, many times across history. We fuck things up because we are idiots and fools, but somehow, who knows how, we still muddle through. These things will pass and these idiots will be replaced by other idiots.

It’s easy to dwell on the “evil” of men like Adolf Hitler… but to demonise them like that simply makes them seem like one-offs that could never happen again. What does history tell us? That if we don’t learn from it, then we’re doomed to repeat? Hitler was elected as a patsy that people thought they could control. They were wrong. Sound at all familiar to you?

Here’s one for Mike Pence and anyone who thinks that we should legalise the right of people to discriminate on religious grounds: “Goodness is about what you do. Not what you pray to”, or, to put it another way, “Evil begins when you begin to treat people as things”

One last one – my favourite:

Terry Pratchett was a one off and I’m sad that there isn’t going to be a Discworld novel about Ankh-Morpock voting to secede from the rest of the Sto Plains. One can only imagine what the patrician would have to say about that, or indeed about the very idea of asking people for their opinions in the first place.

He is missed, but his name will live on in the clacks.

I got distinctly misty-eyed reading this tribute by his daughter this afternoon.
Posted by swisslet at 19:35