A Facebook friend of mine posted this on their wall the other day. 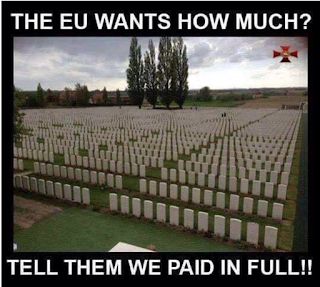 She's a perfectly decent, reasonable person.  No, actually.... that's not fair because she's much more than that: she's one of the most community and family-minded people that I know who is constantly putting herself out for other people.  She'd probably be the first person to tell you that she's not a particularly deep thinker, but she's always seemed open-minded and prepared to listen to other people's points of view in case she might learn something.  She's a nice person; one of life's good eggs.

And she posts this.

This is nasty, pernicious and ignorant rubbish. It's clearly offensive - and not just in its use of exclamation marks.  I don't know if she has any relatives or friends who served in the armed forces, but this friend often posts up things about war heroes and military stuff on her Facebook wall. Just today, she posted something from the local paper about a veteran of WWII stepping back into a Lancaster bomber for the first time in 60 years. She clearly cares about these issues, but is also clearly part of a generation that seems to take it entirely for granted that France and Germany aren't constantly at each other's throats and that wars like these are passing out of living memory.

I imagine she'll proudly be wearing a poppy over the next few weeks and will see no dissonance in that show of respect with the contempt shown by the makers of this picture towards the sacrifices of those soldiers who gave their lives fighting for freedom in Europe.

I suppose I should no longer be shocked to see this sort of stuff.  It's been more than a year since the referendum, and our national political debate has been bumping around at about this sort of level since before the 2015 general election.  You want to know where the line is? Look behind you - we crossed it some time ago.

I think what shocks me the most is the good-hearted people - like my friend - who are taken in by this sort of garbage.  Referendums, eh?

Clearly, I'm naive, but surely some things should be way beyond the scoring of cheap, reductive political points, shouldn't they? Speaking of which, it's nearly time for my annual rant about the poppy....

Email ThisBlogThis!Share to TwitterShare to FacebookShare to Pinterest
Labels: barking at the moon, insightful political analysis