big guns blew me away 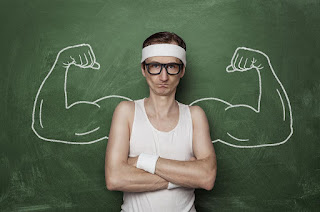 After a month of this damn chest infection, it's fair to say that I've been going a little stir-crazy.  You might think that I'd be able to enjoy a break from running and cycling, but no.... I don't rest well.

My chest X-ray from last week has come back clear, which is great news.  My lungs also apparently now sound clear... but I'm still being bothered by a tight chest and some difficulty breathing.  Not to worry, as well as the two inhalers I'm now using, the doctor prescribed me some steroids.

It's only a short course lasting 5 days, but my imagination is already running wild about the possibility that I'm going to be able to make my return to running cutting much more of a dash in my running vest as I pump my guns on the way to PB after PB.  I may have to start worrying about out-of-competition testing and keeping unadulterated child's piss in my fridge in case the doping police come round unexpectedly and demand a sample... but that's really only a small price to pay for a return to fitness.

After all, the only way to bag a classy lady is to give her two tickets to the gun show [kisses biceps] and see if she likes the goods.

Because that's how steroids work, right?

Wait, what? You're saying that a corticosteroid is entirely different to an anabolic steroid?