a time to every purpose...

I've been thinking a bit about getting older.

One of the things they never tell you about growing up is that at no point in your life do you actually feel as though you've grown up.  I wouldn't go back to being seventeen again for any money in the world, but at the same time, I still find it a little difficult to believe that I'm apparently now a forty-three year old man. When did that happen?

I'm not really sure what I wanted to be when I grew up.  I suppose I still don't really know. At one point, as a very young child, I remember being dead-set on becoming a motorcycle policeman (which would have had to be over my father's dead body: as a doctor who attended more than his share of road traffic accidents, he naturally wasn't that keen to have any of his children on a motorbike.  A few years later, I completed one of those career advisory questionnaire things and it suggested that I should give serious consideration to a career as a zoo keeper.

Frankly, I was as surprised and disappointed as anyone that I ended up in a career in IT.

Still, it does look like I've always quite liked hats and animals. 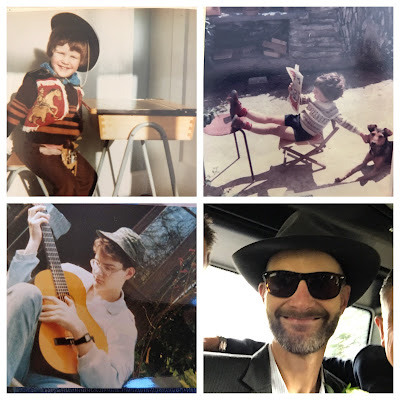 I think I'm really styling out that cowboy hat, to be honest.  I'd totally wear that outfit again.

And yes, that guitar is upside-down and no, I wasn't some kind of lost, teenage troubadour.  Yes, that comic is upside-down too.  It must just be how I roll.

On the train on the way home from London last night, we were joined in our carriage at Leicester by a teenager,  He took the opportunity of a sparsely populated train to park himself in first class to plug in his phone and make use of the free WiFi.  Rather than be amazed at the fact that he was able to charge his phone and connect to the internet on a train at all, he was more concerned and irritated by the fact that the connection wasn't quite reliable enough for him to have a Facetime chat with his friends.  Isn't it amazing how quickly things change and just as amazing how quickly they're taken for granted? The same youth also didn't seem to be able to afford a belt for his trousers.  I appreciate that it's the entire purpose of fashion to confuse and anger the older generation.... but really?

*looks again at the pictures above*

Email ThisBlogThis!Share to TwitterShare to FacebookShare to Pinterest
Labels: me, young people