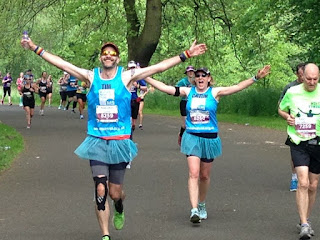 On the one hand, I’ve run more organised events than ever before: three full marathons, four half marathons, two 20 mile races, the 15 mile Belvoir Challenge, 55km over Thunder Run weekend, the London 10 miler and well over a 1000 running miles in total. I’ve also run 25 parkruns and volunteered at parkrun on another 30 occasions. I’ve run summer and cross-country league races for my athletics club, earned an England Athletics coaching qualification, coached a couch to 5km programme and an Improvers group up at the track on a Tuesday night. I’ve helped to raise £11,000 for the MS Trust, taking our fundraising total over the last 4 years to something approaching £40,000. I’ve appeared in the national press and on television in a charity appeal on the BBC.

On the other hand, my multiple sclerosis seems to have progressed a bit this year. I’ve not had any noticeable relapses, and I actually came off any kind of disease modifying drug when I stopped injecting Avonex in January. At the same time, my left leg is much more prone to muscle spasms (which seems to be helped a bit by CBD oil) and my bladder has now become unpredictable enough that I have started self-catheterising. It’s amazing how quickly it becomes normal to push 40cm of tubing up a previously one-way passage. Does it help? Well, yes and no: I’ve had more completely uninterrupted nights since I started, which is obviously good, but I’ve also had some days where it doesn’t seem to have made any difference at all, and I frustratingly have no idea why. Still, we keep buggering on, don’t we? If you can’t laugh at these sorts of indignities, then what’s the point? Besides, when you’ve been well enough to be able to run three full marathons in a year, including one under four hours, I really don’t feel as though I have anything much to be complaining about.

I know I’ve not been blogging much. After a good run of around 15 years, I suddenly found that the itch seemed finally to have been scratched and I no longer felt the urge to get something up most days. You know what? That’s okay. I’m not going to say that I’m going to make more effort in 2019, but I am going to try to keep going. I like writing and I haven’t been doing enough of it for myself in 2018 and will try to make more time for it in 2019. If nobody reads it, that’s okay too. Although, to be honest, that’s always been true!

If there is anyone still reading this, I hope you survived 2018 as intact as possible and that you’re fit and ready to take on whatever life throws at you in 2019. You’re amazing.

If you're interested, here's my year on Strava.
Posted by swisslet at 21:59

Email ThisBlogThis!Share to TwitterShare to FacebookShare to Pinterest
Labels: another year over