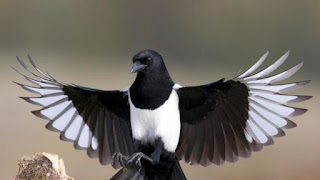 I must have been about nineteen when it began. It was the magpies, of course. I don’t know why or how it happened, but they spoke to me, their rude chattering laid bare before me in all of its glorious, symphonic clarity. At first, I was afraid to perceive the meaning behind their staccato laughter, but soon I was simply overjoyed to be included in their world. It was, of course, a secret never to be told. Who would believe it? But quickly their voices became cacophonous, unbearable tidings of the devil himself. And now I cannot make them stop.