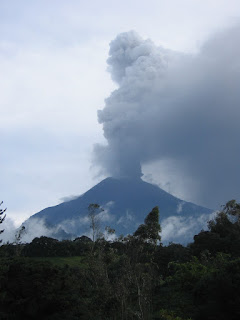 I don’t really believe in bucket lists. I’m not a fan of keeping lists of things I want to do before I die. Partly, this is because it seems a nonsense, as the simple truth is that no one knows when they’re going to die. If you could die tomorrow, why are you writing a list instead of getting out of the door? Mostly though, my objection probably comes from how lucky I am to have done some incredible things in my life, so a bucket list seems kind of redundant.

I’ve swum in the chilly waters off Kaikoura in New Zealand as hundreds of dusky dolphins swam around me and leapt over me. I was told that you need to sing to them through your snorkel to keep them interested in you and to stop them just swimming off when they get bored. As a result, I’ve discovered that they’re big fans of “Bad Romance” by Lady Gaga.

I’ve skydived from 10,000m above the Skeleton Coast in Namibia, where the big dunes of the Namib desert meet the ocean, freefalling for a seemingly endless 30 seconds before the parachute opened, surprisingly filling me with mild disappointment. Here I learned that it’s okay to pack your main parachute up in a slightly slapdash way as long as you’re careful with the reserve as that’s the really important one.

I’ve done a lot of diving too: on the Great Barrier Reef in Australia, in the Maldives with giant Manta Ray doing a graceful dance together no more than a meter above my head, or along the edge of a canyon into the deep ocean surrounded by literally three hundred sharks, all bigger than me and a few casually swimming along behind me as if to see if I was worth the effort of a closer look. It’s at moments like these when you really begin to appreciate your place on the food chain.

I’ve walked with lions and wolves, seen sperm whale, humpback and orca, kayaked with baby seal, stood within 2m of an adult male grizzly bear, watched dawn breaking above the jungle temples of Ankor Wat… So there’s no question that I’ve been very lucky.

All this brings perspective; when you experience the elemental beauty of nature first-hand like this, it’s not hard to understand your own existence as comparatively insignificant, in the most wonderful way. All our sound and fury ultimately signifies nothing, and that’s okay.

The time I felt this most acutely was standing on the sides of Mount Tungurahua in Ecuador as it erupted. Ecuador is a small country, barely the size of the UK, but it contains in that space an enormous diversity of landscapes, from high Andean paramo all the way through to Amazonian jungles (not to mention the Galapagos Islands). We were on a three-week trip and wanted to cram in as much of this as we reasonably could. We hiked the high Andes up to about 5000m, we watched hummingbirds feed, fished for piranha in tiny jungle rivers, brushed tarantula off the benches before sitting down to dinner, drank fresh passionfruit juice and picked coffee berries straight from the tree. Banos is a city in the middle of the country and is renowned for its hot springs and adventure activities. I’ve never seen the appeal of bungee jumping, but we did mountain bike along mountain gorges and, on our first evening in town, we took a trip up the town’s volcano (as our guide would say, the hot springs are not for free) Now, when you think about active volcanos, the chances are that you’re thinking of Pompeii or Krakatoa, but not all volcanos are quite that explosive. Tungurahua means “throat of fire” in Quichua, and although it is erupting and you actually have to drive over the pyroclastic flows that have poured over the road to reach the town itself, you’re not seriously in danger of being overrun by lava. The town does have volcano warning alarms, but apparently the lava moves so slowly that you will have around three days to actually leave the town before you’re really in trouble. Mind you, the volcano dominates the skyline and, as you drive into the town, you can see the column of smoke and ash it produces from a hundred miles away. It’s quite an impressive sight.

That first evening, we drove up the volcano before it got dark. It’s quite steep and narrow in places, and as we slowly wound our way up the narrow, wooded tracks, we came across a tiny, wizened old lady dressed in the traditional costume of the region, complete with natty woollen Spanish-style trilby hat (a legacy of the Spanish colonisation). There’s only one path up or down the mountain, so we stopped and – through our guide – offered this lady a lift, which she gratefully accepted. As we continued up the mountain, we began to be aware of the rumbling of the erupting mountain. “Ah,” said this tiny, birdlike lady, cackling delightedly, “Mother Tungurahua is putting baked potatoes into the oven for her children”. 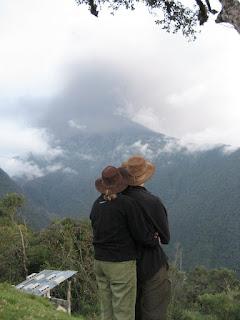 Before long, we dropped her off to make her own way, and as she smiled and waved, we continued up the mountain. Not long after that, I was standing in the gathering dusk, listening to the sound of an erupting volcano and feeling the ground rumbling beneath my feet. I have never before in my life felt quite so connected with our planet whilst also feeling utterly insignificant. It was, in the most literal way possible, awe inspiring.

Our precious planet is huge and beautiful and life is short. Later that day, I ate guinea pig for the first time. I don’t recommend it. Tarantula is nicer and neither are a patch on crickets fried in sesame oil served as a bar snack. Travel really does broaden the mind… as well as the palate.

Email ThisBlogThis!Share to TwitterShare to FacebookShare to Pinterest
Labels: ecuador, memories, nostalgia ain't what it used to be, travelling