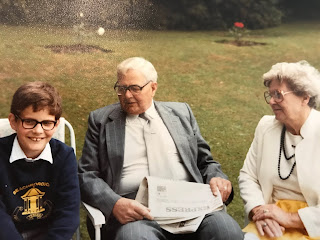 The way I remember things, I breezed through my school years. Academically, at least.

I might still bear the emotional scars of every other part of my education, but I’ve always believed that I found the actual learning stuff part of it pretty easy. Well, apart from maths. I’ve always been weirdly, hopelessly - pathetically - bad at maths. I’m good with words but hopeless with numbers and always have been. Until, one day, maths suddenly became less about numbers and more about understanding and manipulating formulae, at which point the fog started to lift. Luckily for me, this was also the point at which the serious exams started. If you know how formulas work and you know how to use a calculator, you’re laughing. I went from set 5 (out of 6) to an A grade and a possible a-level almost overnight.

These days, this cackhandedness with numbers only really annoys me when it comes to Scrabble and crosswords: when you’re good with language, you’d imagine that turning a jumble of letters into words would be simple, right? Wrong. It’s disappointingly mathematical. But I digress.

I’m not a genius by any means, but I am curious, was blessed with a good memory and had a priceless ability to be good at the types of exams we use to assess our children. It’s no accident that, as my education proceeded, I increasingly specialised in essay subjects. It’s not a skill that’s been all that much use to me in my adult life, I must say, but I always seem to have been able to put together coherent arguments in long form writing under pressure. Lucky me, as my exam results all the way through to my Masters degree will testify.

Throughout my schooling, at the end of every term, I would be sent home to my parents with a trunk full of dirty laundry and a little report booklet. This booklet would contain a handwritten update from every one of my teachers for every subject detailing my progress for the term. I’m sure lots of people dread this kind of feedback (and I’m fairly sure all teachers everywhere must find this to be a terrible chore and it’s no wonder many resort to tired old cliches. MUST. TRY. HARDER). I used to love it. How could I not? As I remember it, this was mostly a succession of accounts of how remarkable I was: top of the class and on track for great things. Who wouldn’t want their parents to see this?

Except in Maths, obviously. Until the age of about 14, my maths reports mostly remained a succession of tired and frustrated teachers not understanding why they couldn’t be the one to unlock my potential in the subject. Then, at the end of my first school year before the run into GCSEs began in earnest, I completed a 90-minute maths paper in about 40 minutes. A bored (and surprised) teacher began marking it on the spot as the rest of the class completed their papers. He put my score up on the board behind him when he finished the marking: 98%. Everyone else, still working their way through their exam papers just groaned. My response? To ask what I got wrong. You can only imagine how much the rest of my class hated me in that moment. My maths reports got better after that.

I was at my parents’ house a little while ago and they had a box of various bits and pieces on the kitchen table. I think they’d been looking for some old photos, but, for some reason, this box contained one of those old report booklets. I picked it up to have a closer look as I have two brothers and, sure enough, it turned out to be one of mine. It was the report for the Christmas term of 1986. I was in the scholarship stream at this point, being prepared for a set of exams that would ultimately mean that my parents got a fairly hefty discount off the bill for my next school when I was awarded an academic scholarship (my prize? I got to have my name in capital letters in the school directory and to be cordially hated by almost everyone else in a school not famed for its academic achievement and where the highest social status was reserved for the members of the school rugby team). I eagerly rifled through this report in its distinctive yellow binding, hoping to be able to show my wife what an intolerable swot I was at the age of twelve (she’d understand because she was, and remains to this day, by her own account, much worse).

I quickly passed over all the good ones and came to rest on a report for Ancient Greek. Now, I only studied Greek because I had jumped a year at this school and was now in my second year of the sixth form, and the headmaster (who taught classics) wanted to give me as much intellectual stimulation as he could.

At some point over the last thirty-five years, I have pushed this memory somewhere back into one of the dustier corners of my mind. Seeing this single, nearly transparent little piece of report paper brought it all flooding back to me. You remember I mentioned that I was inexplicably bad at maths? Well, I think I was worse at Greek. It was… well… it was all Greek to me. I remember sitting in that classroom on a dark winter evening and just failing to get my mind wrapped around this strange language that didn’t even use the same alphabet. It started promisingly when I learned by rote how to recite the alphabet. It’s something I can still do today and this skill has been surprisingly and unexpectedly useful to keep track of COVID-19 variants. That was as good as it got. When it came to writing that alphabet down, I couldn’t even get past epsilon, will all its preposterous curls. This single report told the whole sorry story, with this kindly and patient headmaster expressing his frustration that I seemed to have developed a mental block and was refusing to process any of the information he was trying to teach me. His frustration clearly came, not because he believed I wasn’t capable of learning Greek, just that I’d decided that I couldn’t and therefore wouldn’t. He finished by saying that, if this continued for much longer, he was going to have to – with great reluctance – remove me from the class. Not long after, this was exactly what happened. I remember feeling only relief at being put out of my misery.

Reading this old report at my mum and dad’s table brought those memories back into focus. They aren’t unpleasant memories, by any means, but now they were challenging my long and somewhat proudly-held view of myself as having a more-or-less unblemished record of academic success throughout my school years. This is a key component of my image of myself and now it turns out to be not true. It’s not exactly untrue, and maths was probably all the evidence anybody needed to deflate that particular argument anyway. In fact, I’d say that it remains mostly true.

That’s almost the same thing, isn’t it? Given some rounding to the nearest significant figure. That’s close enough for jazz, as my old maths teacher used to say.