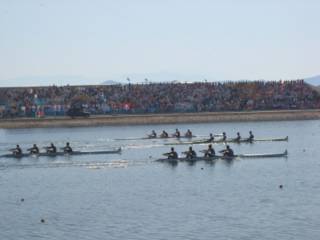 Today was all about the rowing. We got up (with some difficulty after the beers consumed at the beach volleyball and beyond) at 05:30. We're moving rooms in the hostel today as well, so I need to pack and move my bag before we can leave. Head out to catch the bus to Schinias, which takes about 45 minutes and goes out almost as far as Marathon. Feeling a bit rough, so at the venue tuck into coffee, water, cheese pie AND pizza (food at the venues is not fantastic, and is definitely not varied). Get to our seats on about the 1850m line and settle down to watch the finals. single sculls, pairs etc. culminating with the men's coxless fours and Matthew Pinsent's assault on a 4th consecutive gold medal. Britain have already done okay by this point, with a bronze medal in the women's double sculls and a silver in the women's pairs. At around 10:30 the men's four sets off. We are sat in merciless sunshine, made all the more potent by the refelction off the water, and we are surrounded by Germans, Kiwis, Belgians, Danes, Norwegians and lots and lots of Brits....

The Brits take an early advantage on the Canadian world champions, but by the time they reach us at about the 18oom mark, they look marginally behind, and there's not far to go. They cross the line and they briefly flash up on the screen as having won, but this is quickly taken down and replaced with a photo finish. Unbelievably tense. The two crews don't know who has won, and it isn't until we go mental in the crowd that they realise that Britain have done it, but a convincing 0.08 of a second! As good as a mile. The crew stay in the boat and row over towards us in the stands, which was nice. Once chap (apparently something to do with the london 2012 bid) jumps into the water and gives Pinsent a flag. It's all very emotional - Matthew Pinsent certainly has nothing left to give and the big man breaks down into tears as the national anthem is played and they receive their medals. I had read before that James Cracknell thought that Pinsent often keeps his best to himself, and that he does just enough when in the boat. Cracknell is a 100%-er and he made it his mission to taunt Pinsent into giving more, even though riling the big man would leave Cracknell gasping. Well, Pinsent had nothing left in the tank after this. That last couple of hundred meters saw him give everything that he had. That's how much he wanted it, and that's why he is such an amazing Olympian. Damn it, I was practically blubbing myself at this point. This was amazing sport, and no mistake. I am proud to be able to say that I was there.

One of Luke's mates sends him a message at this point which just seems to sum up the whole mood: "Piece of Piss".