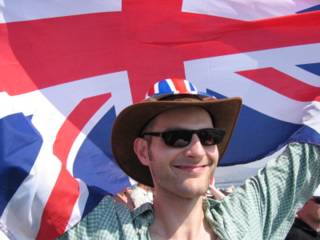 Tom texts me after the race to tell me that I have been on the BBC (later corroborated by Nick). Nice!

We also learn that Ben Ainslie has completed his magnificent comeback in the Finn and has won the gold.

After a magic morning, we head back into Athens and have lunch in a nice taverna just underneath the acropolis, have a quick wander with Ali and then get a quick hour's kip. With Ali, Rich and Bob I head off towards Piraeus and the Olympiakos stadium to watch a 1/4 final in the football between Mali and Italy. It's a decent enough game and basically runs to type: the africans are exuburant and naive, and the italians are cynical and defensive. It goes to extra time (after the Malians miss a penalty) and then the Italians score just when it looked like being a shootout. Pah! Still, we entertained ourselves royally inventing chants (to the tune of "Joelene"... Mali! Mali! Mali! MALI! and to the tune of "Come on Eileen" ... "come on mali!" etc.)

In looking for a bar after the game to let the crowds subside before we head back into Athens, we narrowly avoid being trapped in a gay bar - well, that's what it looked like. The door was shut, but the neon was on, so we had a look inside, and there was a huge hairy fat man with his shirt off in there. Mik and Rich were keen, but Bob and I were having none of it, so we head back into Athens for moussaka and some beer.

In the meantime John, Jon and Luke have headed off to the main complex to see if they could get some tickets to the velodrome. Chris Hoy picked up a gold for Britain on Friday, and Bradley Wiggins is off in the 1km pursuit, so they are determined to get in. Fair play to the boys, they get tickets (John's ticket is from the Japanese Olympic Committee), and they get to see several world records broken and another British gold medal. After that they get some tickets for the evening athletics and see Kelly Southerton pick up a bronze in the Heptathlon. Another long day for them (and more money spent), but these Olympics are a really big deal for John, and he is determined not to let anything get in his way. Hats off to them, but I'm knackered and need my beauty sleep.